Banque de France Bulletin no. 225: Article 8 Climate change: what are the risks for the French financial sector?

Global warming is generating more frequent and extreme weather events, which will significantly weaken local economic activity and lead to the erosion of asset values. Policies implemented to fight global warming could also destabilise the financial system if the transition to a low-carbon economy were too sudden or too late; again impairing the value of financial assets. That is why supervisors and central banks are urging financial institutions to quickly implement the internal arrangements required to monitor and mitigate the risks. In April 2019, the Autorité de contrôle prudentiel et de résolution (ACPR – Prudential Supervision and Resolution Authority) published a survey of French banks and insurers’ practices in this regard. It was found that, despite certain areas of progress, climate change is still only partially and inconsistently integrated into financial institutions’ risk management processes. 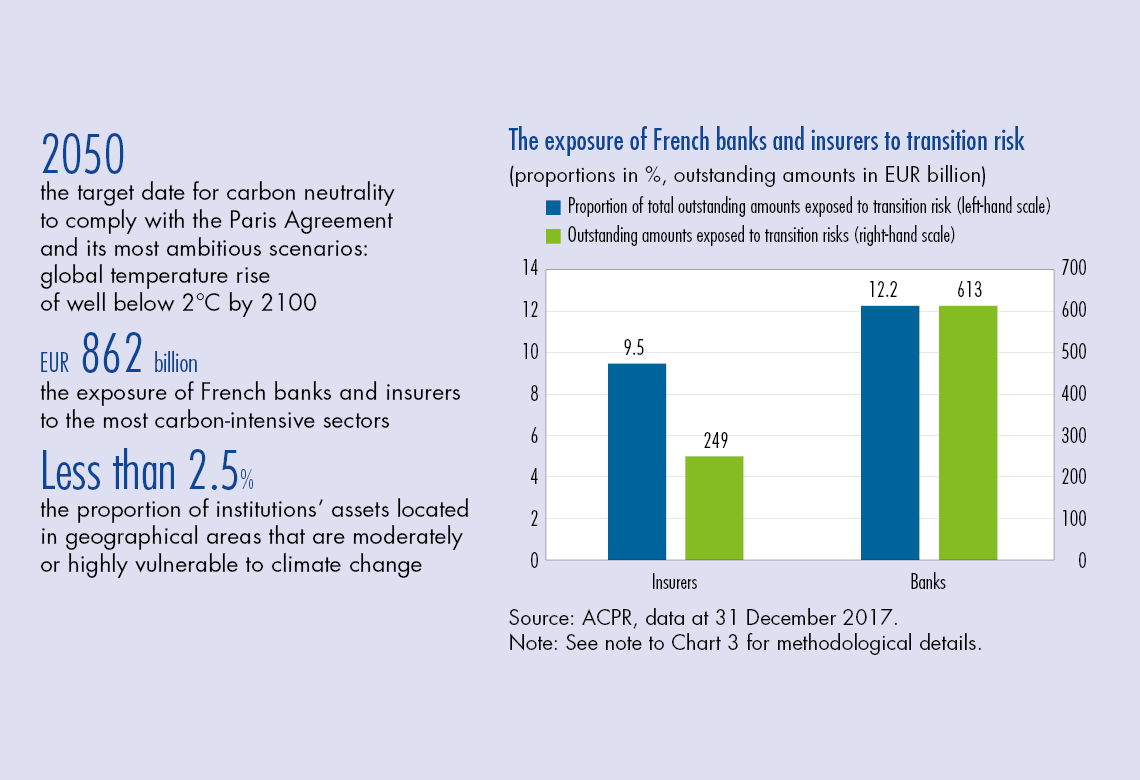 1 Climate change as a challenge for financial stability

In its report published in October 2018, the Intergovernmental Panel on Climate Change (IPCC) showed that global warming of only 1.5°C could significantly increase the risks and impacts of extreme weather events, particularly droughts and wildfires, coastal flooding, heavy rainfall and heat waves. A rise of closer to 2°C above pre industrial levels, which is twice the global warming observed so far (IPCC, 2018), would have even more severe consequences (Masson Delmotte et al., 2019). However, without a significant intensification of policies to fight global warming, experts estimate that the rise in temperature will exceed 4°C by 2100 (see Chart 1).

The above mentioned changes mean that the increasing severity and frequency of natural disasters caused by global warming could affect the financial sector and financial stability.

Physical risk reflects the direct impact of climate change on people and property. When that risk materialises, it can have three types of consequences for financial institutions: (i) an erosion of the value of assets and securities pledged as collateral in credit transactions, when they are linked to areas vulnerable to natural disasters; (ii) an increase in damages covered by the insurance sector; and (iii) a deterioration in local economic activity. Heightened physical risk would affect various parts of the world differently depending on the characteristics of the local ecosystem. For example, the same temperature rise across Europe would make droughts more severe and more frequent in Mediterranean Europe than in Northern Europe (see Chart 2, below).

To mitigate the risks associated with global warming, the signatories to the Paris Agreement committed to limiting the global temperature increase to below 2°C by 2100. This objective also exposes the financial sector to transition risk. Indeed, the work of the IPCC (IPCC, 2018) shows that compliance with the Paris Agreement requires carbon neutrality – net zero greenhouse gas (GHG) emissions – over a relatively short horizon (by 2050 for the most ambitious scenarios). Several pathways to achieving this objective are possible: (i) strengthening policies to fight global warming; (ii) major technological progress, particularly in low carbon energy generation; and (iii) changes in consumer behaviour. If these changes were to occur suddenly and financial institutions were unprepared, certain assets…