Banque de France Bulletin no. 225: Article 4 The Credit Mediation Scheme: 10 years of service to businesses and the economy

The Credit Mediation Scheme for Businesses was set up in October 2008 at the height of the financial crisis. It was introduced in response to shocks in bank credit supply, as the concentration of requests over time (2008-09) and by sector shows. Since its creation, 23,500 mediation cases have been resolved. Successful mediation halves the business failure rate at one year: part of this decline can be attributed in the short term to the Credit Mediation Scheme, which also has a long-term positive effect on credit allocation. Today, the scheme continues to provide support to businesses and is even rolling out its activities to new sectors. 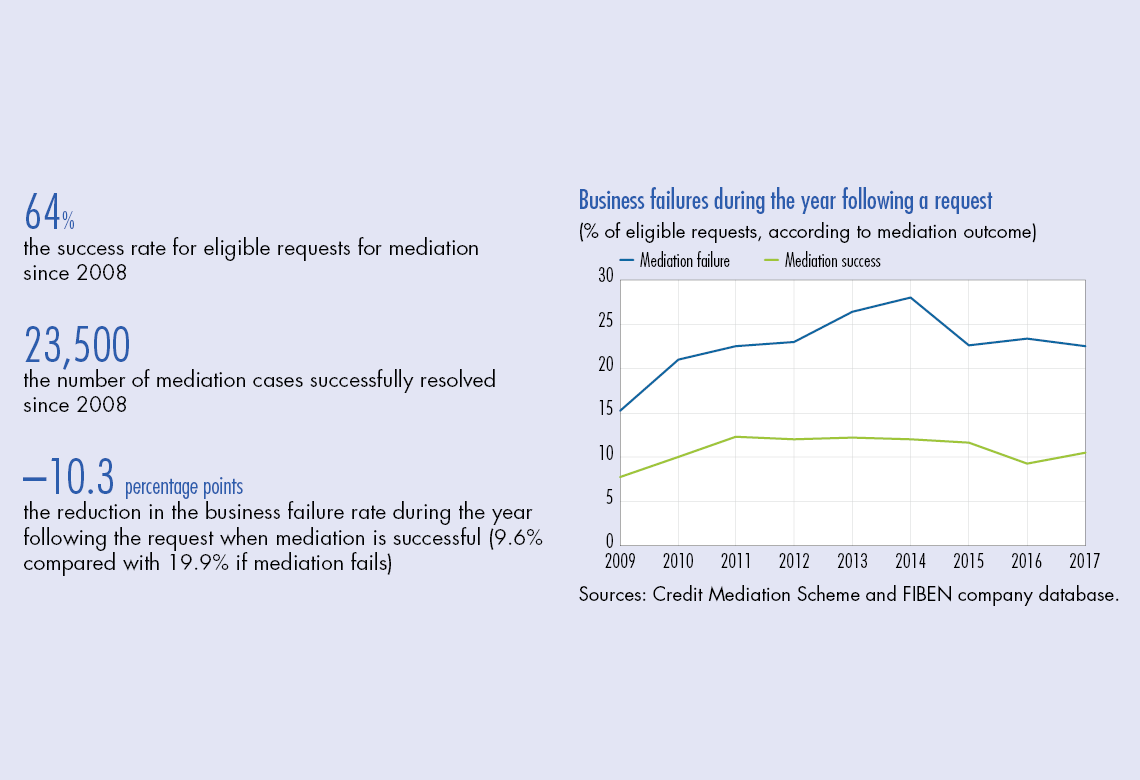 1 A crisis management mechanism that has now stabilised

A high concentration of requests during the crisis years

A National Credit Mediator was appointed on 23 October 2008, only five weeks after Lehman Brothers filed for bankruptcy. This role is performed by a prominent figure (René Ricol) with the support of the departmental teams of the Banque de France, the Institut d’émission des départements d’outre-mer (IEDOM – the French overseas departments’ note-issuing bank) and the Institut d’émission d’outre-mer (IEOM – the French overseas note-issuing bank) – whose directors act in their capacity as regional credit mediators – on the one hand, and a network of trusted third parties, on the other. The scheme, which was rapidly introduced in cooperation with financial centre players, primarily banks, was further consolidated in July 2009 with the signature of a national credit mediation agreement that set out the working methods and the responsibilities and commitments of each party.

The mission to assist businesses with their financing difficulties, which continues to this day, was coupled at the launch of the scheme with a role in monitoring banks’ compliance with their commitment to facilitate access to credit in return for the public support measures adopted at the height of the financial crisis.

Has the Credit Mediation Scheme overstepped its powers by forcing banks to lend to non-viable businesses? If this were the case, we would have seen a high apparent success rate for the proposed plans, and an equally high business failure rate for supposedly successful mediations. In reality, even though the Credit Mediation Scheme no longer performs this monitoring function, the success rate observed at its launch was not far from its current level (see Chart 2 at the end of this section). The business failure rate for successful mediations at the time was slightly lower than the levels reached in recent years (see Chart 4 in Section 3).

At the scheme’s launch, the number of requests for mediation peaked (during the 2008-09 period), with 16,000 accepted cases and 4,000 requests refused for ineligibility (see Chart 1). These figures declined significantly until 2012, with 2,700 accepted requests and less than 1,000 refused. After bouncing back slightly in 2013, requests dropped off sharply up to 2017, and remained relatively unchanged in 2018 at around 1,700 cases, approximately 1,000 of which were deemed eligible.