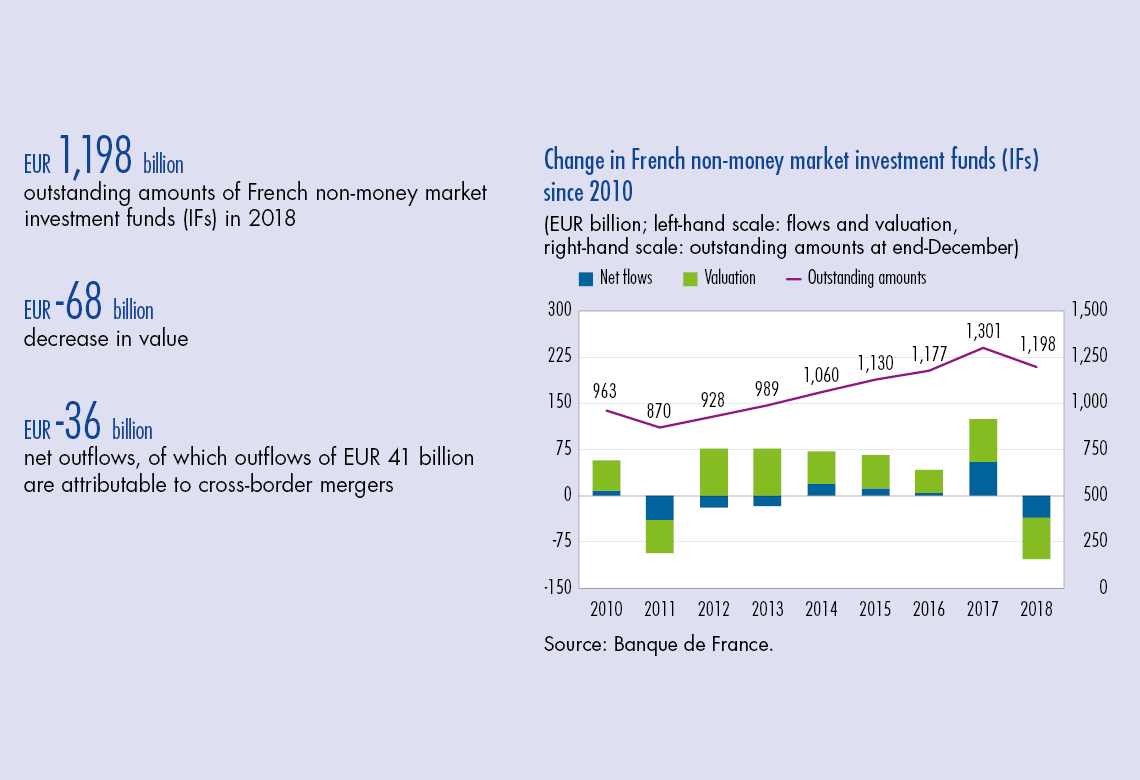 A 7.9% decrease in outstanding amounts, mainly related to downward valuations

At the end of December 2018, the outstanding amounts of French non-money market investment funds (investment funds – IFs) amounted to EUR 1,198 billion, accounting for 80% of all outstandings in both money market and non-money market funds in France. After the strong growth observed in 2017 (EUR 134 billion, of which EUR 55 billion was due to net inflows), IFs declined significantly in 2018, by EUR 103 billion. This represents a 7.9% decrease on December 2017. Non-money market investment fund shares/units held by households accounted for 3.7% of their financial net worth in 2018, falling well short of life insurance policies and regulated savings products, which accounted for 38% and 15%, respectively.

A third of this decline (EUR 36 billion over the year), which is the first since 2011, is due to a scope effect related to cross-border fund mergers (see Section 2). However, the remaining two-thirds are attributable to negative valuation flows of EUR 68 billion (5.2% of outstanding amounts) resulting from the change in the main stock market indices and the average performance of euro area IFs over the period (see Section 3).

A decrease that affects almost all fund categories

The outstanding amounts of all categories of non-money market funds decreased in 2018, with the exception of real estate funds and employee savings funds. Equity funds account for more than half of the total decrease in outstanding amounts with a drop of EUR 63 billion due to strongly negative valuation effects and cross border mergers (see Section 2). The bond and mixed fund categories, also hit by downward valuations during the year (decreases of 1% and 6% of outstanding amounts, respectively), sustained net redemptions of almost EUR 21 billion. Real estate funds, which had net assets of EUR 107 billion at the end of 2018 (see Chart 2), were the exception, recording net subscriptions and valuation gains of 8% and 5%, respectively, in annual growth terms. Within the “other funds” category, which accounted for net inflows over the year of EUR 0.1 billion, only employee savings funds received positive net subscriptions (EUR 3 billion).

The sales of securities recorded under assets by all funds mainly concerned equity, almost all of which was…