Economic research – Short-time work enables companies facing economic difficulties to reduce the hours worked by all or part of their employees.

The ad-hoc recourse to short-time work in response to a drop in activity has helped safeguard jobs in France. Three main lessons may be drawn from the data analysis on the recourse to short-time work based on the economic, financial and social characteristics of companies in France over the period 2002-14: i) the geographical proximity of companies that have already had recourse to this scheme fosters the transmission of information and thus contributes to spreading its use; (ii) the scheme is efficient in safeguarding jobs, despite the adverse effects associated with it, and (iii) inefficiencies are generated by the recurrent recourse to this scheme, particularly in terms of aggregate output. 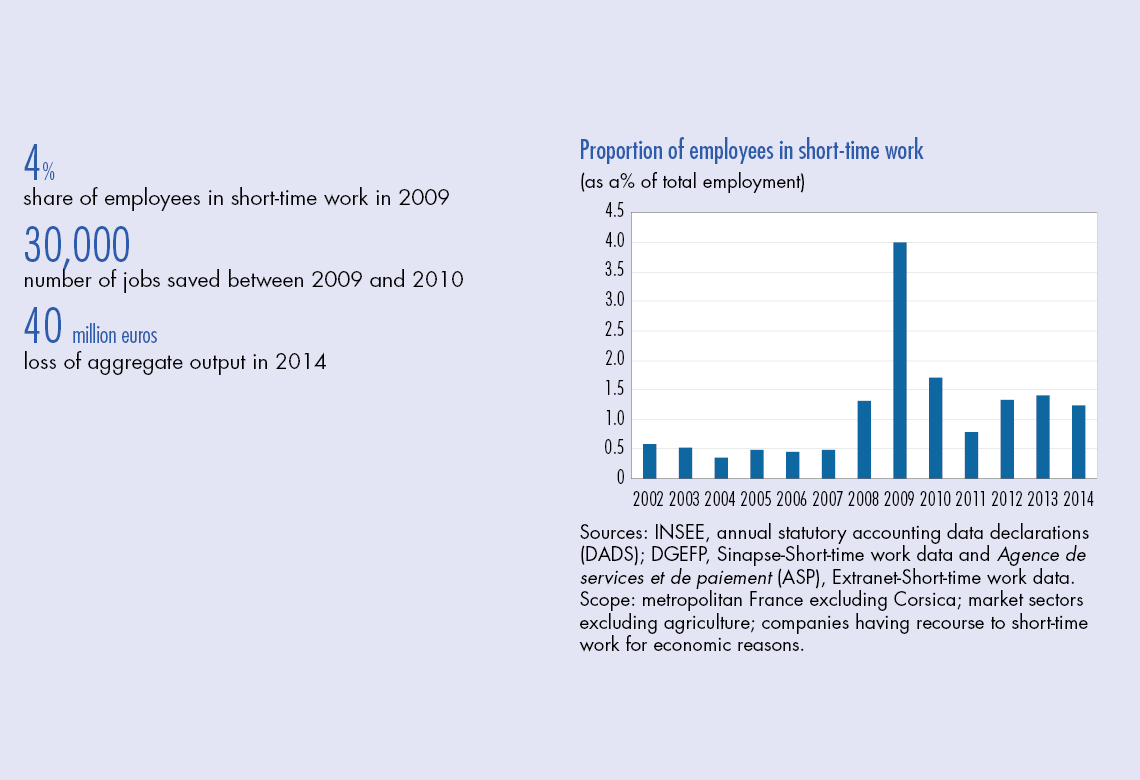 The objective of short‑time work is to combat unemployment. Companies facing economic difficulties may use it to reduce the hours worked by all or part of their employees. The earning losses resulting from the reduction in hours worked are compensated jointly by the company and the public authorities. Recourse to this scheme is strictly regulated by law (see Box 1).

Since the Great Recession of 2008‑09, short‑time work has seen renewed institutional interest in many countries of the Organisation for Economic Co‑operation and Development (OECD), in particular in France (see Box 2 and Chart 1).

The greater recourse to short‑time work has revived the interest of academic literature in the subject. The theoretical studies highlight the positive effect of this scheme on employment and wage maintenance (Braun and Bruegemann, 2017, Burdett and Wright, 1989, Niedermayer and Tilly, 2017, Van Audenrode, 1994). They also pinpoint a double adverse effect. On the one hand, some companies may have recourse to short‑time work for profitability reasons although they are not facing any economic difficulties. Even in the absence of the scheme, these companies would have maintained their level of employment. These windfall effects lead to a decline in hours worked without any effect on employment (Balleer et al., 2016, Burdett and Wright, 1989). On the other hand, some companies facing structural difficulties may also be tempted to resort to the scheme. This limits the reallocation of their labour force towards more productive sectors and thus reduces aggregate output (Cooper et al., 2017).

Short‑time work remains controversial, especially in France. It is therefore necessary to conduct an economic assessment of its effects. This is the subject of three recent studies (Marcon et al., 2019, Cahuc et al., 2018, Cahuc and Nevoux, 2017) whose main findings are discussed below. …