Banque de France Bulletin no. 226: Article 4 The increasing reliance of large French groups on debt: a financing strategy that has its limitations

Since 2014, large French groups have increased their use of debt relative to other resources for the financing of their activities. The fall in the average cost of debt has created a favourable environment for this type of strategy, making it less risky in the short term. Indeed, in 2018, the coverage of interest and related expenses by operating earnings reached its highest level in a decade. This financing strategy nonetheless exposes firms to longer term risks:

• their return on equity starts to be driven more by a leverage effect than by improvements in operating profitability;
• their ability to service their debt would deteriorate markedly if interest rates were to rise over the medium-term;
• if needed, they would find it harder to rebuild their cash buffers, which have shrunk in size since the highs of 2012;
• new financial debt is notably being used to finance acquisitions, the future earnings on which may turn out to be lower than anticipated. 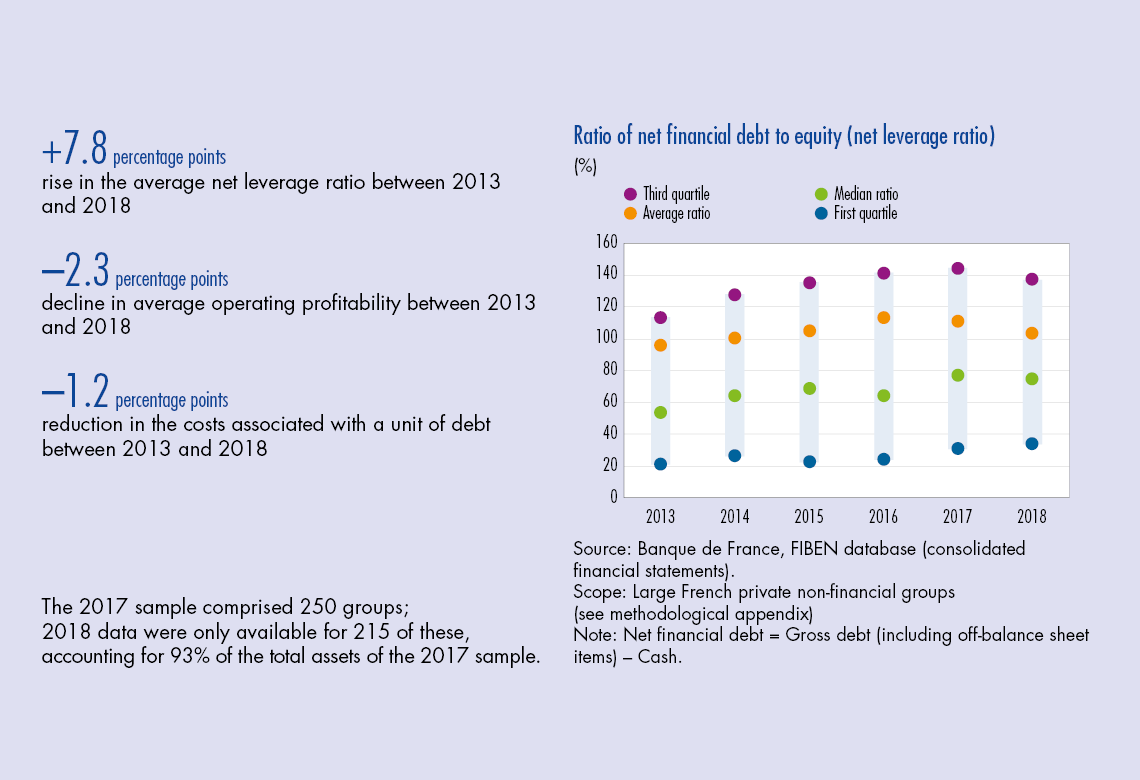 The present analysis relies on data from the consolidated financial statements of the major French private sector non‑financial groups listed in the Banque de France’s FIBEN company database. For each entity, the scope of consolidation covers the parent company and its subsidiaries, including those located abroad.

Consolidation nets out any intragroup flows, especially those relating to operating revenues and expenses, enabling a more accurate analysis of a group’s activities. Using consolidated figures also makes it possible to focus specifically on a group’s external debt. However, consolidation reduces the amount of sectoral detail available (see the appendix for how this issue is dealt with).

The improvement or deterioration in a group’s financial health over a given financial year is measured by its net profit. Measuring recurring net profit as a share of overall turnover provides an indication of a group’s ability to make money on its output. This ratio of net profit to turnover is known as the profit margin.

The improvement has been particularly notable in the manufacturing, construction, information and communication sectors.

Operating profitability is defined as the ratio of a firm’s operating profit to the total amount of resources (equity capital, net financial debt) used to finance its economic activity and enable it to operate.

Since 2016, large French groups’ average operating profitability has fallen, and it continued to decline over 2018 (see Chart 2). The performances of France’s large groups are thus less impressive when viewed alongside the amount of resources used, and especially the increase in their net financial debt.

Large groups mainly use two sources of financing: equity capital (internal financing) and financial debt (external financing). The latter can be further broken down into bank credit and market debt.

The leverage ratio is…

publication
Banque de France Bulletin no. 226: The increasing reliance of large French groups on debt: a financing strategy that has its limitations
Download (EN)
Companies