Over the past decade, emerging economies have experienced repeated withdrawals of capital by non resident investors (“sudden stop” episodes). This was also the case recently, with the tensions of mid 2018 related to the tightening of monetary policy in the United States. These sudden stops have major consequences for the economic and financial conditions of the affected countries. Rapidly detecting such episodes is thus an essential part of the risk analysis for these countries. To this end, the authors present the data available as well as the advanced estimators constructed at the Banque de France, which also allow a detailed analysis of the determinants of capital flows. Via an empirical application of these higher frequency tools, the authors demonstrate the influence of financial conditions in the United States on recent trends in gross portfolio flows to emerging economies. 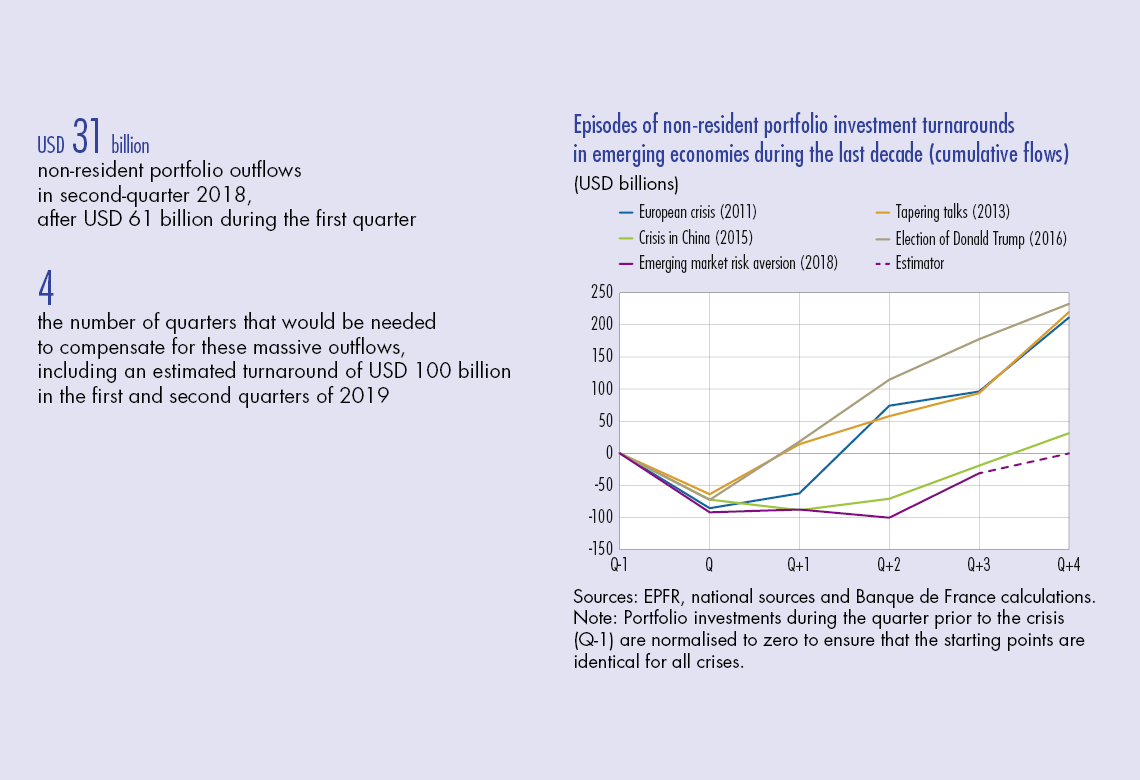 This article focuses on net portfolio investments – asset purchases less asset sales that do not fall into the category of direct investments – by non residents in emerging economies.

Measures taken in the United States and their consequences

The economic policy of the United States in 2017 18 had a significant impact on financial markets, international capital flows and global economic activity. US trade policy, which has led to major tensions with China, has heightened economic uncertainty in a number of sectors. The US tax reform enacted in December 2017 resulted in the repatriation of around USD 500 billion of US multinational profits held abroad. From an accounting point of view, these transfers have caused a sharp decline in non resident foreign direct investment (FDI) in countries that had previously been beneficiaries of these funds (Switzerland, Ireland and Luxembourg in particular). The widening budget deficit in the United States has led to a rise in the issuance of US Treasuries providing an additional safe asset support. At the same time, the tightening of monetary policy during 2018 led to a hike in domestic interest rates across maturities. The combination of monetary and fiscal policies has thus resulted in a rebalancing of international portfolios in favour of US sovereign bonds.

Among the emerging economies, Argentina and Turkey were the worst affected by capital outflows in 2018, due to their more fragile economic fundamentals (persistent external and fiscal imbalances, high inflation, short term foreign currency denominated debt). In both countries, capital outflows led to economic crises. Argentina requested a loan from the International Monetary Fund (IMF) in order to meet its international commitments. Other emerging economies have also been affected, witnessing capital outflows (see Chart 1) and generally depreciated currencies (see Chart 2), as well as authorities stepping in to either introduce or reinforce macroprudential or capital control measures, or to directly intervene in the markets to smooth out excessive volatility in their currency flows.

The need for appropriate tools to monitor emerging economies’ flows

In 2018 the combination of external factors and fragile fundamentals led to the largest decline in net flows to emerging economies since 2008 (particularly in the case of portfolio and banking flows). These flows have an extremely strong impact on the financial stability and domestic activity of emerging economies, either directly through financing, exchange rates and inflation, or indirectly through economic policies introduced…