Economic research – Over the past 25 years, central banks have undergone a revolution in the way they interact with the public: from secrecy to extensive communication. Transparency is not only a democratic imperative: it also improves the efficacy of monetary policy. Since the financial crisis, communication about future policies – known as forward guidance – has become a key policy tool. It requires central bankers to weigh each word in order to ensure that the economic players, markets and the public do not misinterpret forward guidance announcements as a sign about the future state of the economy. In the future, central bank communication must be ready to evolve in order to address monetary policy challenges arising over the long run. 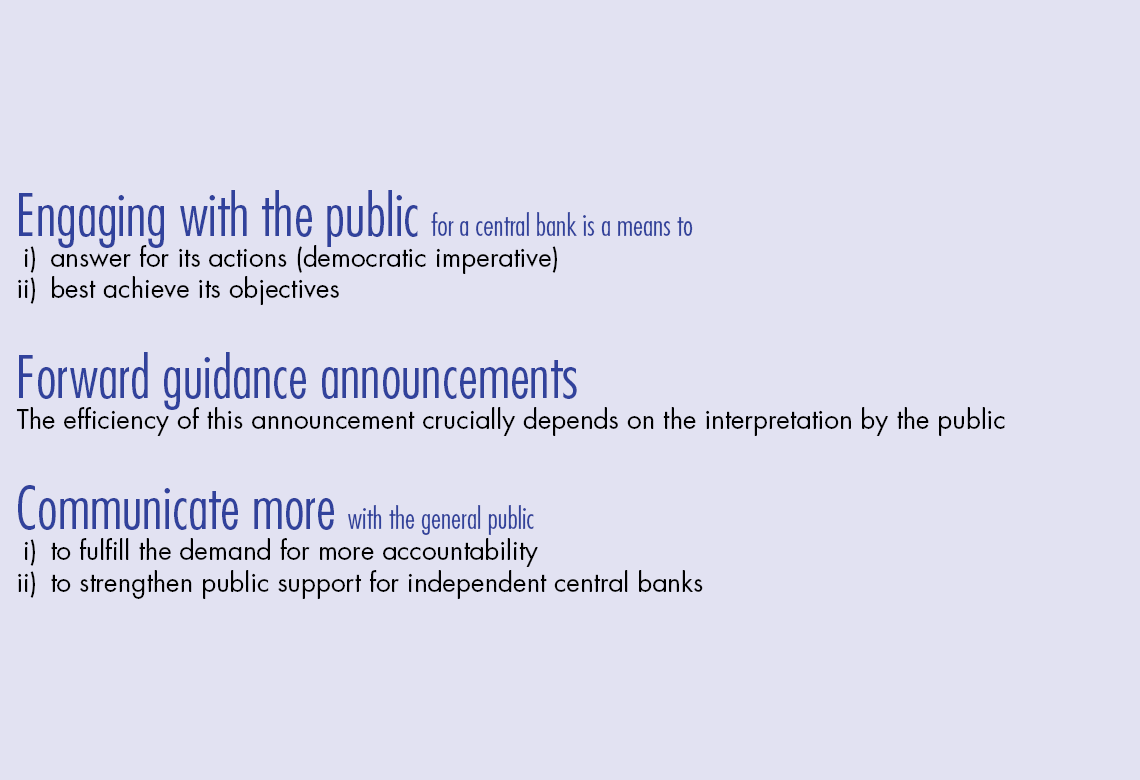 Over the past 25 years, central banks’ relationship with the public has undergone a radical reversal from secrecy to extensive communication. In the late 1980s, the Federal Reserve (Fed) did not explicitly communicate its target for the Fed Funds rate and Fed chairman Alan Greenspan warned that anyone who found him clear had probably misunderstood what he had said. Today, most central banks of developed countries hold press conferences after policy decisions, where they explain present policy and provide indications as to its future evolution.

This revolution in communication was initiated by the central banks of small open economies, such as the Reserve Bank of New Zealand and the Bank of Canada. In the 1990s, these central banks adopted inflation targeting, a policy framework that gives a central role to the communication of their objectives and the rationale behind their policy decisions. Although major central banks such as the Fed and the European Central Bank (ECB) did not explicitly adopt inflation targeting, they followed a similar trend. As of the 1990s, the Federal Reserve started publishing statements on the state of the economy, the rationale for policy decisions and the target range for the Fed Funds rate (1994), the votes of individual members (2002), and the minutes of the Federal Open Market Committee (FOMC) meetings (2005). As for the ECB, it has held press conferences after monetary policy decisions since its inception in 1998, including a Q&A with journalists. Since 2015, it publishes accounts of monetary policy meetings.

Two major motives for communication justify this reversal. First, communication is essential to transparency and accountability. These duties fall on any public institution charged with a mission of public interest. But they are all the more important for central banks. Since the 1990s central banks have been granted greater independence to pursue price stability and economic stabilisation. It comes with a greater duty to explain monetary policy actions and how these actions serve the objectives with which they have been entrusted.

Second, communication is also an instrument to enhance the efficacy of monetary policy. Most central banks have objectives for inflation or economic activity, but price setting, production and consumption decisions are ultimately made by firms and households. The control of the central bank on the economy is only indirect: it uses its control over a few instruments – mainly the overnight interest rate and the size of…