Banque de France Bulletin no. 226: Article 7 SMEs and VSEs in France: an improved financial situation and easier access to credit

Compared to the mid-2010s, the economic and financial situation of French SMEs/VSEs has improved. Most of the accounting ratios used to assess the health of companies have evolved positively, while remaining generally at less favourable levels than in the pre-crisis years. VSEs remain more fragile than SMEs. Access to credit has never been so easy, both for SMEs and VSEs. Lending is particularly dynamic and its cost very low. The relationship between SMEs/VSEs and banks is rather satisfactory and has improved in recent years. However, attention should be paid to three points: (i) payment times; (ii) strengthening the financial expertise of small business leaders (a point on which the Banque de France has recently launched various actions) and (iii) the major challenges ahead (such as digital transformation or taking environmental issues into account). 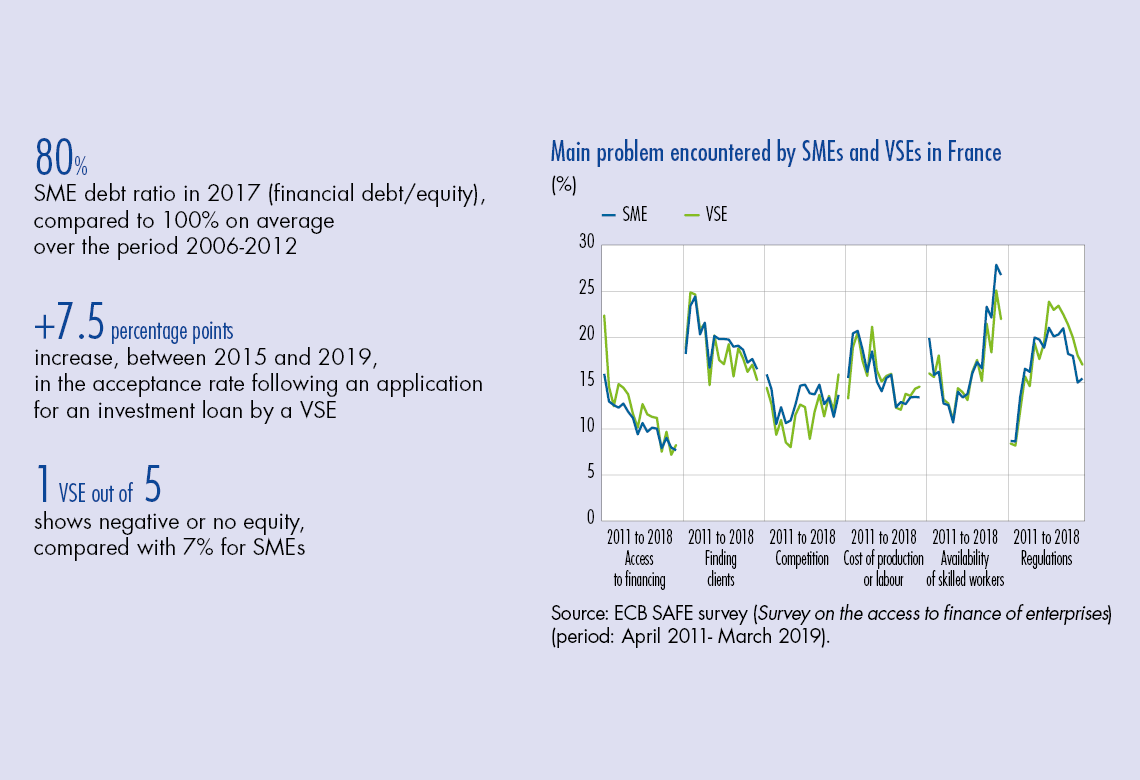 The Observatoire du financement des entreprises (Observatory for Business Financing) brings together the main organisations representing companies and the financial sector, public players in the field of financing, chambers of commerce networks and the main providers of public statistics and economic analysis.

The Observatory’s reports are the subject of a consensus between its member institutions, and the work carried out throughout 2019 led to the publication of a report on 18 December 2019 on the “Financing of SMEs-VSEs”. Indeed, the last complete overviews of the economic and financial situation of SMEs and VSEs, carried out by the Observatory, date back a few years. 10 years after the crisis, it seemed important to carry out a thorough review of the financing of companies, focusing on SMEs and, more specifically, on VSEs.

Compared to the mid-2010s, the situation of SMEs and VSEs has improved. Most of the various accounting ratios used to assess the health of companies have improved significantly, while generally remaining at less favourable levels than in the pre-crisis years.

This is particularly the case for margin rates and the various ratios measuring corporate profitability. However, according to the first available data, developments in 2018 were slightly unfavourable.

SMEs’ equity capital has strengthened, more markedly in recent years than at the beginning of the decade. The contribution of profits played a crucial role in this development from 2014 to 2017.

Over the decade, SMEs’ investment effort remained below the pre-crisis level, and therefore not very strong. However, and partly as a result of the weakness of investment, self-financing of investment increased significantly, boosted by the rise in profits, which was in turn brought about by the rise in margin rates and the fall in interest charges. Similarly, SMEs’ cash position improved significantly as the share of cash in their balance sheet increased.

This development took place against a backdrop of relatively stable working capital requirements, “frozen”, in particular, by indicators relating to payment times that have hardly changed in recent years.

In general, the improvement concerns all sectors. For margin rates, this trend is marked in industry and trade. Conversely, in construction, the improvement is extremely limited compared to the fall observed between 2007 and 2012. Similar developments are observed for rates of return.