Banque de France Bulletin no. 226: Article 6 The green bond market is expanding rapidly but needs to be measured more accurately

Green bonds differ from conventional bonds in that they are used to finance projects expected to have environmental benefits. In the four years since the Paris Climate Agreement (2015), the green bond market has grown rapidly. However, it is still far below the scale needed to finance the ecological transition. In addition, in the absence of a precise legal definition of the assets that can be financed, issuers run the risk of being suspected of greenwashing, while investors face increased information costs in order to determine the type of project they are funding. In response, European institutions have begun discussions on a classification system (taxonomy) for sustainable economic activities, which would be a first step towards an official definition. The statistical evaluation of green financing is also made difficult by the lack of easily accessible data on the sectors that are the final beneficiaries of the financed projects. Bridging these gaps would considerably improve the quality of analyses on the financing of the transition to a sustainable economy. 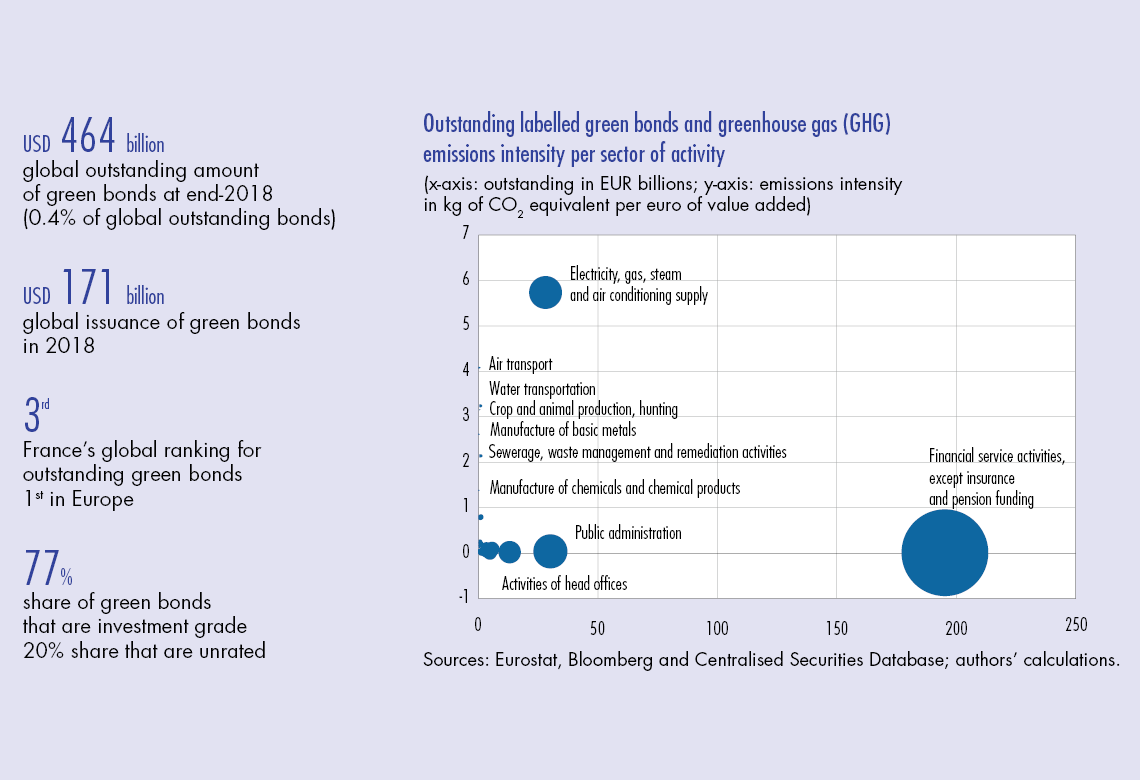 1 There are various definitions of the green bond market

What is a green bond?

The first green bond dates back to 2001 and was issued by the city of San Francisco in the United States in order to finance solar energy. However, the market really took off after the 2015 Paris Climate Agreement, despite the lack of a clear and internationally recognised definition of what these securities can be used to finance. For the time being, the only way of distinguishing a green bond from another type of bond is by the nature of the underlying project – green bonds can only be used to finance projects classified as “green”. They can be issued by any type of issuer (private or public, international institution), and can be used to finance a new project or to refinance an existing one. They also have the potential to attract new types of investor, notably those who are concerned about the environment.

To justify that the financed project qualifies as “green”, issuers can refer to the Green Bond Principles (GBP) – a set of broad principles set out in 2014 by a global consortium of investment banks known as the International Capital Market Association (ICMA). These principles are updated regularly, but do not constitute an official label or taxonomy. They distinguish between four types of green bond (see box), and take the form of recommendations on the use of the proceeds, the process for evaluating and selecting projects, the management of the proceeds, and reporting.

The issuer of a green bond has to provide a detailed description of the project to be financed. It can also request that the bond’s “green” status be certified by a third party: an international organisation such as the Climate Bonds Initiative (CBI), a public authority, a specialised rating agency (Vigeo Eiris) or a generalist rating agency (e.g. Standard and Poor’s). The CBI’s Climate Bonds Standard and Certification Scheme, launched in December 2010, includes a taxonomy which consists of an evolutive table listing eligible assets and projects by sector. The CBI’s taxonomy is currently used as a global reference tool by the majority of green bond issuers and investors. It distinguishes between “labelled” green bonds which are used to finance projects that are 100% green, and “aligned” bonds which are used to finance projects that are at least 75% green but not fully green.

Green bonds have to meet the…