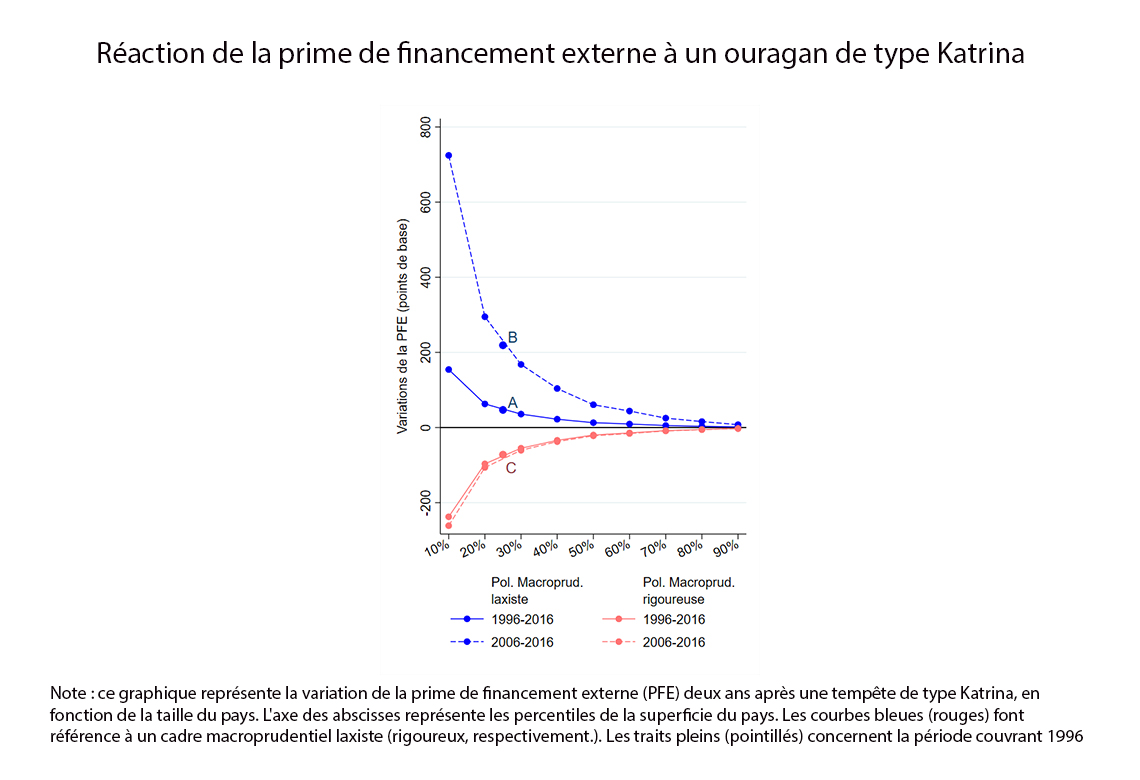 Banks and other financial institutions are exposed and vulnerable to natural disasters (NDs), whose frequency and intensity are increasing with climate change. The impact of NDs on financial systems remains largely unexplored. In the same time, financial shocks and crises have motivated the implementation of macroprudential (MP) measures. Whereas, thus far, these policies have been introduced independently of the growing importance of climate-related financial risks, they may help to cope with them.

Against this background, the objective of this paper is to investigate the financial impact of natural disasters (NDs), characterized by their physical intensity, and to empirically assess the extent to which it might be mitigated by a stringent macroprudential framework.

We use the local projections (LP) method to estimate the financial impact of natural disasters, conditionally to the degree of stringency of the national macroprudential framework. Financial stress is proxied by the change in the external finance premium (EFP), i.e., the spread between the bank lending rate and the riskless interest rate. NDs are gauged by meteorological intensity of storms and floods, with the data being collected from different sources stemming from meteorological stations and satellites. Our measure of prudential stringency refers to the number of macroprudential instruments that have actually been implemented in each country.

Our results, based on a panel of 88 countries over the period 1996-2016, show that storms significantly impact the EFP at the national level, with opposite effects depending on the stringency of the macroprudential framework. A relatively small country (corresponding to the first quartile of the country size distribution in terms of surface area) with a lax macroprudential framework would suffer the largest rise in domestic EFP – of 44 basis points (bps) two years after a Katrina-like hurricane, as shown below by the point A in Figure 1. This deterioration in financing conditions persists beyond 3 years, which suggests a large overall impact in the long run. Importantly, we find that this impact is stronger if estimated over the recent period: when focusing on the data for the second decade of our sample, the estimated hike reaches 219 bps (i.e. point B). By contrast, a small country with a stringent macroprudential framework could benefit from a decrease in the EFP of approximately 67 bps (i.e. point C) two years after a category 5 hurricane.

One potential explanation for the decreasing spread in the case of a stringent macroprudential framework is that an initially healthy financial environment fosters favorable financing conditions to replace destroyed capital with more productive capital. Further investigations suggest that this is precisely the case for middle-income countries, which can be presumed to have sufficient absorption capacity to fully exploit new facilities.

Finally, our results on the financial effects of flooding are not conclusive. As floods are usually clearly located along rivers and coasts, they are also more foreseeable. Hence, this may induce spontaneous discipline and greater insurance coverage, which could render macroprudential measures less crucial.