Does the leverage ratio have an adverse impact on client clearing?

In the wake of the 2008 global financial crisis, the members of the G20 agreed to increase incentives for central clearing in order to mitigate counterparty risk in the financial system. In the past few years, however, tensions have started to appear in the client clearing market. One reason often cited for this is the introduction of the leverage ratio, as the measure does not take into account the initial margins collected by clearing members from their clients as part of derivative transactions.

While this failure to recognise initial margins is consistent with the objective of the leverage ratio – to provide a non-risk based measure as a backstop to the solvency ratio – penalising client clearing activities poses risks to financial stability that warrant further analysis. 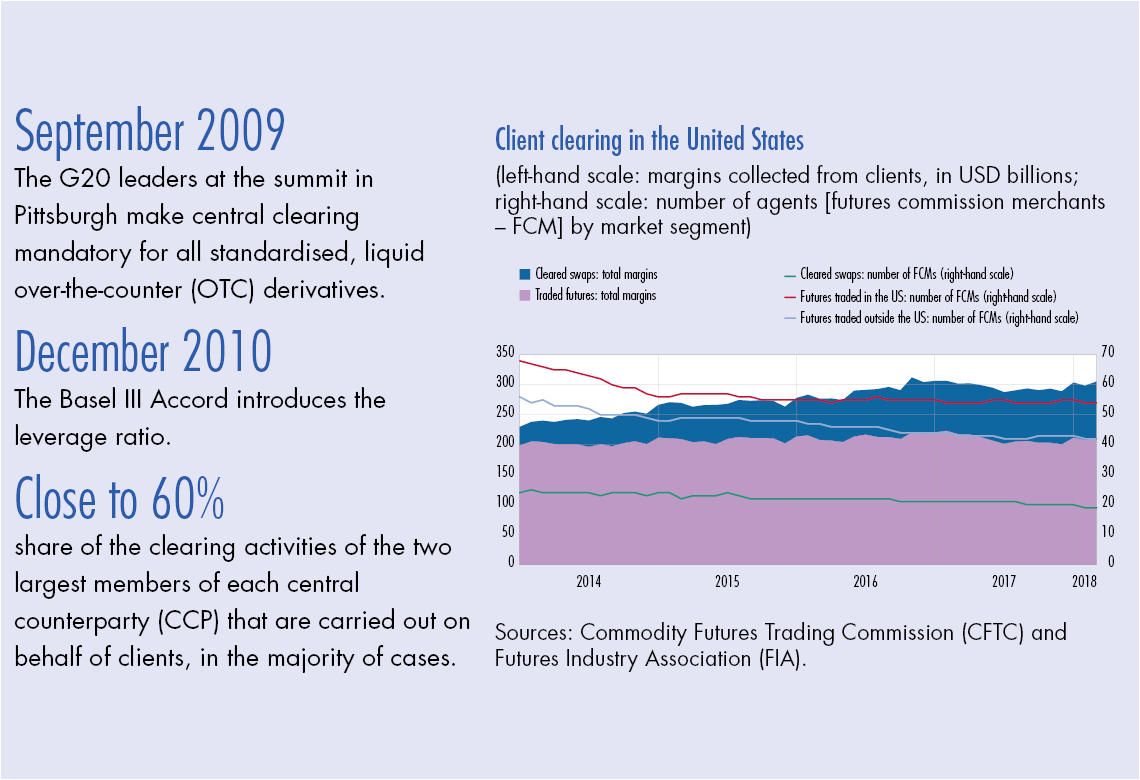 Under the current leverage ratio framework (see Box 1), clearing members offering client clearing services for derivatives are not allowed to deduct the initial margins collected from clients from the denominator of their ratio (see Box 2). This is consistent with the logic behind the ratio, which is that it should provide a non-risk based measure of exposure and should not therefore take into account banks’ credit risk mitigation techniques (including initial margin requirements).

In April 2016, the Basel Committee launched a consultation on the proposed revisions to the leverage ratio framework. Respondents stressed that the measure could undermine clearing members’ ability to continue offering client clearing services. Their main contention was that the leverage ratio ignores the exposure-reducing effect of initial margins.

What is the leverage ratio?

The leverage ratio is a prudential instrument that measures the ratio of a bank’s own funds to its total on- and offbalance sheet exposures. It was put in place in 2010 by the Basel Committee, a forum for international cooperation comprising the central banks and supervisors of 28 countries and tasked with defining common prudential standards for global banks.

Introduced as part of the Basel III framework, the leverage ratio is a simple measure designed to complete the range of tools available to prudential supervisors. It has a twofold objective: i) to prevent excessive increases in the size of bank balance sheets, and ii) to reduce the model risk inherent in the solvency ratio. The latter was introduced under the Basel I Accord (1988) and modified by the Basel II Accord (2004), and is aimed at ensuring that banks hold sufficient capital to cover their risk exposure. To achieve this, it requires that bank exposures be weighted by a factor reflecting the associated risk. This has the advantage of adapting capital requirements to the actual level of risk incurred by the bank. However, it also has a downside linked to the uncertainty of the models used. As a result, the leverage ratio was introduced as a backstop to the solvency ratio and is a non-risk based measure, meaning that bank exposures are not risk weighted and risk-mitigating techniques (such as the collection of collateral to guarantee an exposure) are not taken into account.