At least ex ante, energy efficiency improvements increase investor’s solvency. Associated loans should therefore carry lower interest rates than do otherwise conventional loans. We test this hypothesis using unique weekly panel data on posted interest rates scraped from loan simulators made available online by French credit institutions during 2015-2016. On average, we find that lenders charged a green premium in 2015 but offered a green discount in 2016. We also find that, absent green attributes, interest rates are higher for home retrofit loans than for vehicle loans, which suggests that lenders use the loan purpose as a screening device of unobserved borrower characteristics. Our results together imply that loans for home energy renovation were consistently charged relatively high interest rates, with adverse consequences for scaling up home energy renovation. 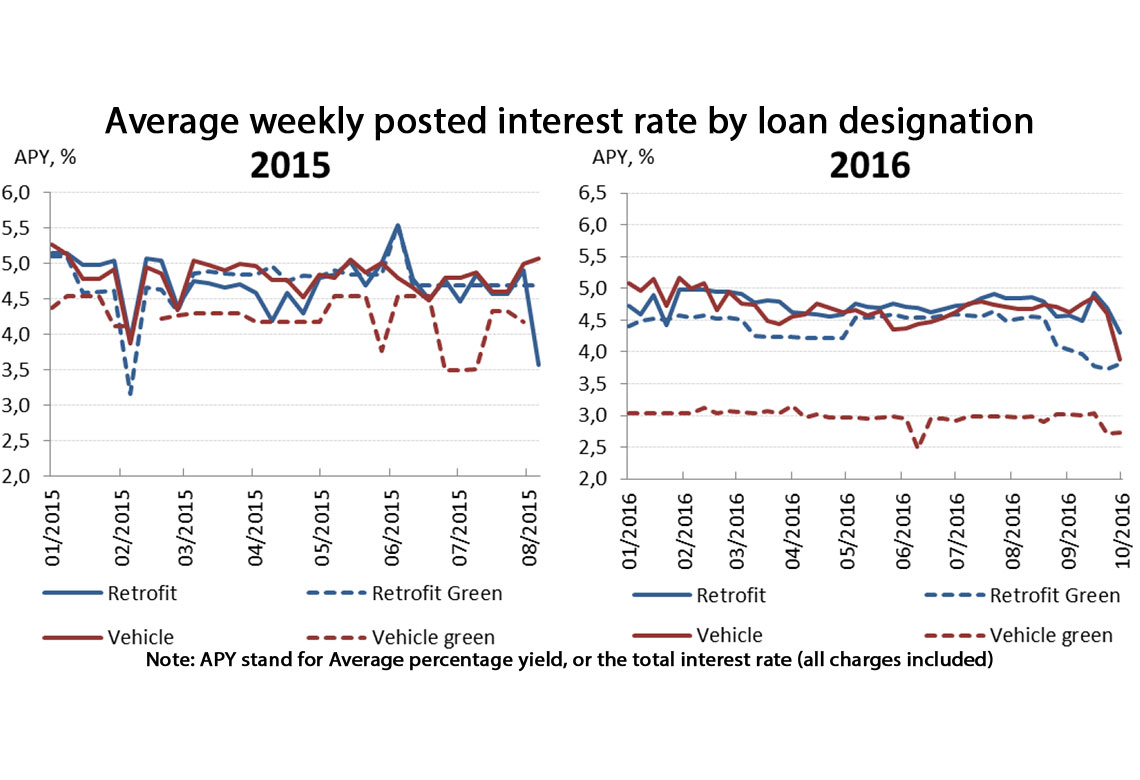 Energy efficiency is commonly viewed as the most cost-effective way to reduce carbon dioxide emissions. As many energy-efficiency measures involve high upfront costs, financing is key to scaling up investment. Effective deployment therefore requires that energy-efficiency loans be priced efficiently. While “credit constraints” are frequently cited as a major barrier to energy efficiency, however, little is known about their nature and magnitude (Palmer et al., 2012).

In theory, a variety of information asymmetries might affect the supply of energy-efficiency loans. On the one hand, energy-efficiency measures, such as home energy retrofits (renovation), should reduce energy expenditures. Compared to an otherwise conventional investment, say the purchase of an automobile, such an “extra-return” should increase the borrower’s creditworthiness, hence drive interest rates down. The effect however vanishes if the lender ignores predicted energy savings, which, according to several studies, might be overestimated (Fowlie et al., 2015). On the other hand, whereas 75% of car purchases in France are financed by loans, this share is as low as 20% for home retrofits, despite comparable amounts borrowed.  This suggests that borrowers have heterogeneous preferences for different types of loans, which lenders can exploit to price discriminate. As a result, the net effect of energy-efficiency attribute juxtaposed on the loan type effect (extra- but imperfectly observable return, heterogeneous preferences) on the interest rates is ambiguous.

In this paper, we test whether the pricing of energy-efficiency loans differs from that of otherwise conventional investments. We use a panel dataset of posted interest rates collected on online credit simulators in France. An interesting feature of the collected data is that consumer information (e.g., age, income, risk profile) is not required in online simulations. We can therefore concentrate on project-based discrimination without being confounded by applicant-based discrimination. Focusing on unsecured consumer credit also allows us to abstract from issues involving collateral.

Our analysis reveals that loan terms for home energy retrofits, contrary to intuition, carry relatively high interest rates. The results suggest that, on average, home energy efficiency is subject to a double energy efficiency gap: the first because renovation projects carry relatively high interest rates with respect to vehicle projects, the second because within the renovation category, the green attribute further increases the interest rate.

Our data undergo important changes in the beginning of 2016, with the rates for green projects shifting significantly downside (which is plausibly related to Quantitative Easing of the European Central Bank), as can be seen in the Figure below. We find a green discount in 2016, but not in 2015. This result is consistent with the notion that financial agents increasingly value environmental aspects, as recently substantiated by An and Pivo (2018) in the US market for commercial mortgages and Karpf and Mandel (2018) in the US market for municipal bonds. Regarding the price discrimination, we observe it in both 2015 and 2016, however, to a larger extent in 2016. This leads us to the conclusion that the double energy efficiency gap observed over the period is not consistent: in 2015, only its first dimension applies, whereas in 2016, only its second dimension applies. In other words, the market seems to increasingly recognize the lower risk associated with green projects, but charges increasingly higher interest rates for renovation projects than for vehicles..