This moderate rise in COT highlights the constraints faced by companies seeking to expand their activity. Indeed, more than 50% of companies reported that certain obstacles prevented them from extending COT, the most important of which remained the shortage of skilled labour.

Finally, the use of digital technologies and robotisation, which was the subject of specific questions in 2018, appears highly differentiated across companies. Almost all of them stated that they had an Internet connection. However, the type of connection, the employment of specialists, the use of storage services (cloud), data analysis (big data) or the use of robots vary considerably according to the size of the companies and their sector of activity. 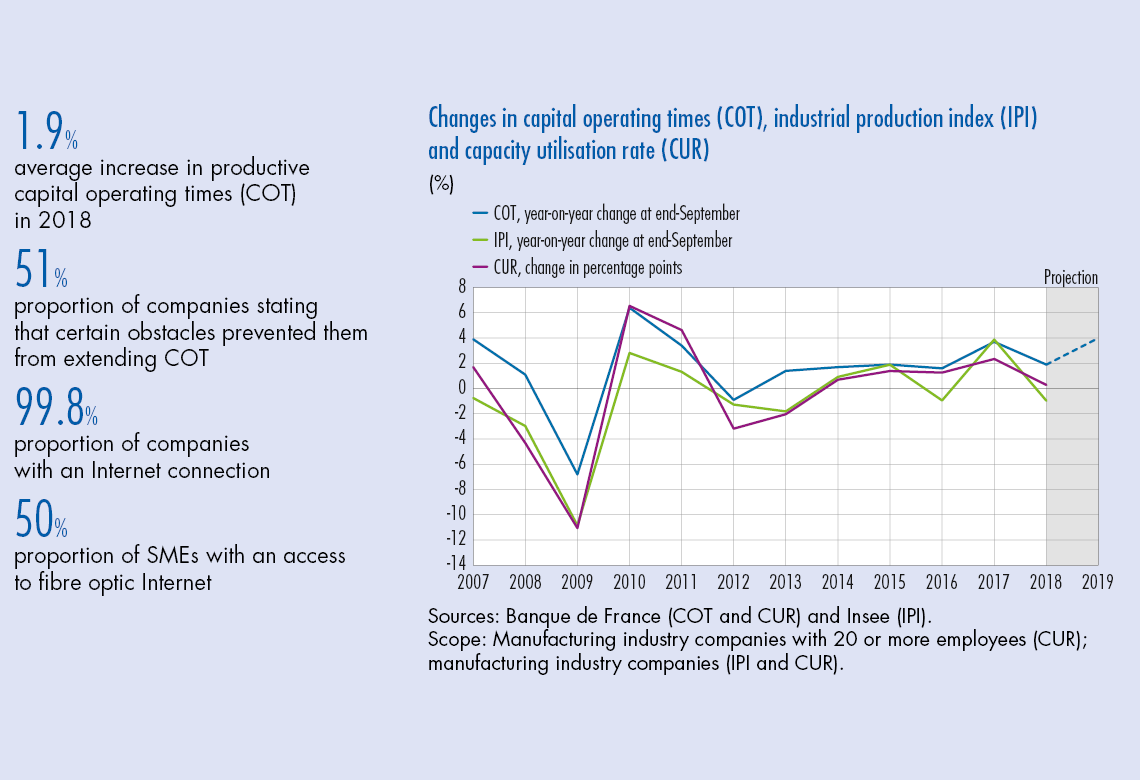 1 Capital operating times increased in 2018, despite a slight slowdown

The Banque de France’s productive capital operating times (COT) survey provides data on the adjustments made by companies to respond rapidly to changes in demand without resorting to new investments. Indeed, faced with an unexpected rise or fall in demand, companies first adjust via their capacity utilization rate (CUR) and capital operating times, then adapt their labour and capital stock – see notably the study by Cette, Lecat and Jiddou (2016), which is based on this survey data.

Changes in COT are closely linked to changes in industrial activity. Manufacturing output was less dynamic in 2018 than in 2017. This change in productive activity, and therefore in COT, was also accompanied by a very slight fall in the CUR over the period (see Chart 1 and Table 1).

While COT rose in the same proportions as in 2017 among small and medium‑sized enterprises, they registered a sharp slowdown among large enterprises, growing by only 0.6% in 2018, compared with an increase of 4.2% in 2017. Changes in COT also differed substantially from one sector to another over these two years. While COT increased in the food, beverages and tobacco products sector (from –0.5% to +0.5%) and in the electrical, electronic and computer equipment and machinery sector (from 4.4% to 5.0%), they posted a sharp fall in the transport equipment sector (from 8.0% to 0.6%) and, to a lesser extent, in the other industrial products sector (from 3.3% to 1.7%) – see Table 1 and Charts 2a and 2b.

Companies expect COT to increase further in 2019, by 4.0%, a projection shared on average by SMEs and large enterprises. At the sectoral level, the food, beverages and tobacco products sector foresees the largest increase in COT (6.0%), followed closely by the electrical, electronic, computer equipment and machinery sector (5.7%) – see Table 1 and Charts 2a and 2b.

In order to raise COT, and thus the use of their stock of capital, companies can extend their…