The Joint Dynamics of U.S. and Euro-area Inflation Rates: Expectations and Time-varying Uncertainty 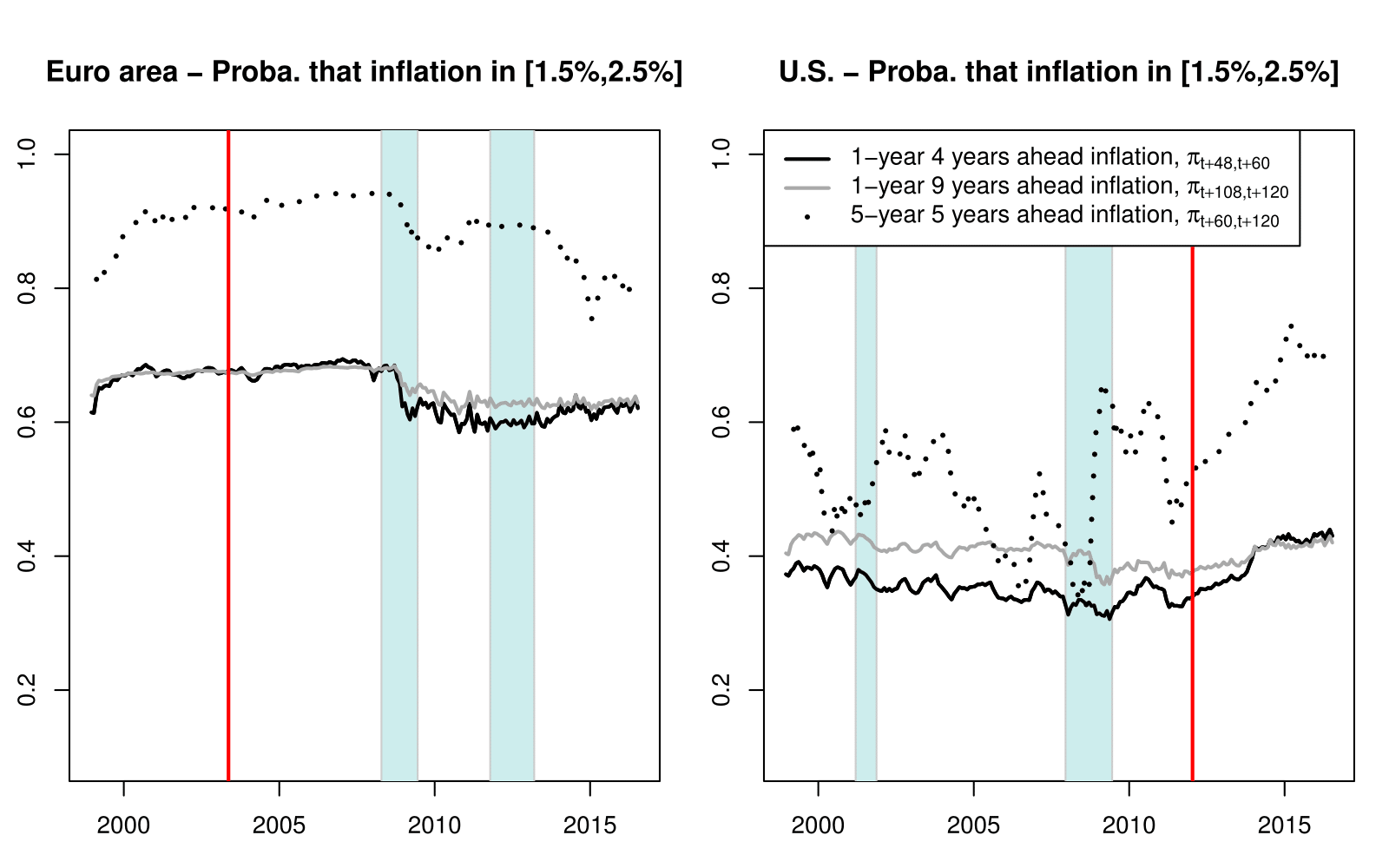 The Federal Reserve System (Fed) and the European Central Bank (ECB) are two of many central banks that have adopted a mandate for price stability devised to foster economic activity and employment. To meet this objective, both the Fed and the ECB pay close attention to various measures of inflation expectations implied both by financial market data and by surveys of professional forecasters. Surveys, in particular, have received considerable attention from policymakers and academic researchers. This notably reflects their documented success in forecasting inflation (e.g., Ang et al., 2007). Surveys are thus closely monitored and often mentioned in various monetary policy communications. Overall, regular references to survey-based measures of inflation expectations in various central banking communications reflect their importance for monetary policy decision-making process.

In this paper we exploit rich information contained in several surveys of professional forecasters with the goal of understanding the evolution of both inflation expectations and inflation uncertainty in the United States and in the euro area. Survey-based measures — unlike market-based measures of inflation expectations — are not affected by inflation risk premium, which may be considerable. In our model estimation, we rely both on survey-based consensus inflation forecasts that correspond to an average scenario and on probability distributions of future inflation rates that provide information about uncertainty surrounding this scenario. We propose a model that takes survey-based inflation forecasts (for various horizons and at varying frequencies) as inputs and produces survey-consistent distributions of inflation at any horizon.

We contribute to the literature of survey-based inflation expectations by constructing a model that takes survey-based inflation forecasts (for various horizons, at varying frequencies and with different definitions) as inputs and produces survey-consistent distributions of inflation at any horizon. Overall, the goal of the paper is not to forecast inflation, but rather construct comparable measures of inflation expectations and inflation uncertainty, for each area, respectively, that would be consistent with survey forecasts. Our model has several noteworthy features. First, common factors are allowed to drive the dynamics of inflation rates in both economies, reflecting ever-increasing interconnectedness between developed economies. Second, our model features time-varying inflation uncertainty. Third, our model is highly tractable because it offers closed-form solutions for conditional expectations and variances of future inflation rates at any horizon.
Our empirical results are as follows. First, our results highlight commonalities in inflation rates’ dynamics of the United States and the euro area. For instance, estimated conditional correlations at one- and five-year horizons support the story of strong co-movement of inflation rates in the two economies. These correlations are relatively high, ranging between about 0.60 to 0.75 over our sample period. These findings suggest that common fundamental shocks appear to drive the economies in the United States and the euro area.

Second, we exploit our framework to assess how anchored inflation expectations are. In particular, we compute probabilities of future inflation rates falling in a certain range (e.g., between 1.5 and 2.5 percent or between 1.0 and 3.0 percent). Comparing these probabilities in the United States and the euro area, we find that, overall, longer-term inflation expectations in the euro area are more anchored than in the United States according to higher levels of these probabilities. However, the probability of five-year five years forward euro-area inflation being in the [1.5; 2.5] percent range somewhat trended down from roughly 90 percent to just under 80 percent, while the probability of the U.S. inflation over a comparable horizon being in the same range increased notably since the financial crisis, from about 40 to roughly 70 percent, possibly reflecting explicit inflation targeting adopted by the Federal Reserve in January 2012.

Third, we compute probabilities of deflation in both areas and find that they are currently negligible despite some notable variation during the financial crisis, especially in the United States. We also find that the probability of inflation falling below 1 percent is currently non-negligible in Europe, where it is of around 40 percent for the one-year horizon, and just under 20 percent in the United States.