According to the Banque de France’s macroeconomic projections for France – constructed as part of the Eurosystem projection exercise on the basis of assumptions with a cut-off date of mid-May 2017 – the economic recovery should be confirmed over the projection horizon, with growth accelerating gradually from 1.1% in 2016 (annual average, working-day adjusted) to at least 1.4% in 2017, then to 1.6% in 2018 and 2019.
From 2017 onwards, the factors supporting French growth should become more balanced. The gains in purchasing power linked to cheaper oil are now behind us, resulting in a smaller contribution from domestic demand, and especially private consumption, than in 2015 and 2016. Conversely, growth should be supported by the upturn in global economic activity,
and by the projected improvement in France’s export market shares after the disappointing performance of 2016. Foreign trade is therefore expected to make a slightly less negative net contribution in 2017, after weighing by 0.7 percentage point in 2016, and should subsequently have a positive impact in 2018 and 2019.
After remaining weak in 2016 at an annual average of 0.3%, HICP inflation is projected to strengthen progressively to 1.2% in 2017 and 2018, and to 1.4% in 2019. Inflation excluding energy and food is projected to remain subdued at 0.6% in 2017, before rising again to 1.2% in 2018 and then 1.4% in 2019. 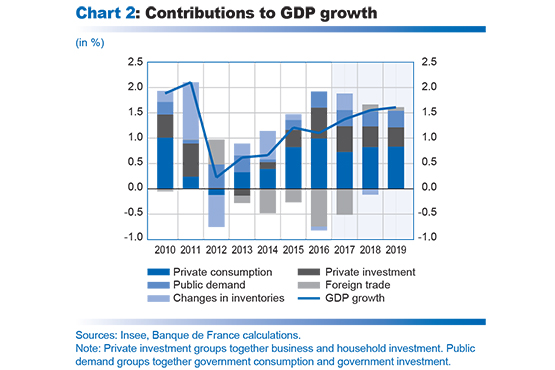 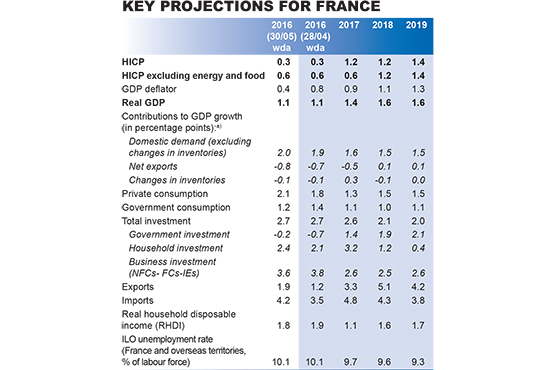 French GDP growth eased slightly to 1.1% in 2016 as the factors buoying domestic demand were partially offset by a strong negative foreign trade contribution. In annual average terms, GDP growth is now expected to increase gradually to at least 1.4% in 2017, then to 1.6% in 2018 and 2019, outstripping potential growth and leading to a narrowing of the output gap. The pace of expansion is nonetheless expected to remain below the average for the broader euro area. This projection is based on technical and international assumptions with a cut-off date of 16 May 2017.

The projection does not take into account any shifts in the economic policy stance or reforms introduced following the elections, or changes to economic agents’ expectations, all of which could affect both the composition and level of activity and inflation. It should therefore be seen as reflecting the current underlying trend, as based on past economic policy choices and international environment forecasts, and before the impact of future economic policy decisions or the usual risks of external shocks.

As the benefits of cheaper oil prices unwind, domestic demand is expected to be more subdued

Business investment should continue to be supported by the increase in economic activity and by low interest rates, despite continuing high debt ratios. However, investment growth is expected to soften relative to 2016, as the extra depreciation allowance, which provided a strong boost to investment last year, came to an end in April 2017. Despite this slowdown, the corporate investment rate should exceed 2008’s peak in 2018, after already recovering markedly since 2013. The upward trend in the margin rate of non-financial corporations (NFCs) is expected to tail off temporarily in 2017, owing to higher oil prices and the stabilisation of the CICE-PRS measures. However, it should then pick up again over the remainder of the projection horizon, with margin rates rising slowly towards the average for 1996-2008.

As of 2017, export growth should pick up again, driven by the global economic recovery

Exports grew by just 1.2% in 2016, resulting in a 1.1% decline in France’s export market shares over the year. The weak performance was in part attributable to exceptional events (poor harvests, problems in Airbus’s production chain, tourism), suggesting that market shares could rebound in 2017 and 2018 if these items revert to their more usual levels.

France’s trade performance is also expected to be lifted by a slightly more favourable international environment, with global demand now seen growing at a sharper pace than predicted in December. As a result, French exports could gather momentum over 2017, despite a disappointing start to the year. The contribution of foreign trade to growth should therefore be less negative in 2017 than over the last three years, and is expected to turn positive again in 2018 and 2019.

After remaining weak in recent years, annual average inflation should strengthen in 2017, driven primarily by the energy component, and then increase further in 2019, fuelled by the other index components

Inflation, as measured by the change in the harmonised index of consumer prices (HICP), should pick up over the projection horizon: after averaging 0.3% year-on-year in 2016, it is projected to rise to 1.2% in 2017, driven by growth in the energy component. The monthly pattern of inflation should prove more irregular, however, with marked fluctuations stemming essentially from energy and food prices. Inflation should then stabilise in 2018, but with the individual components making a more balanced contribution: inflation excluding energy and food is expected to hold steady at 0.6% in 2017 before rising as of 2018 on the back of falling unemployment and rising non-energy import prices. This trend should continue in 2019, supported in particular by a gradual acceleration in nominal wage growth. Both headline inflation and non-energy, non-food inflation should therefore converge in 2019, averaging 1.4% for the year.

The improvement in public finances needs to be kept up

On the basis of the information available at this stage, there is a risk the public deficit will remain just above the 3.0% ceiling in 2017, at 3.1% of GDP, after narrowing to 3.4% in 2016. The tax ratio (tax and social security receipts as a share of GDP) should inch up temporarily by 0.1 percentage point in 2017, owing to the postponement to 2018 of certain cuts to tax and social security charges, as well as the early collection of other taxes, notably corporate income tax. Meanwhile, the ratio of public spending (excluding tax credits) to GDP should fall by 0.3 percentage point over the year: growth in public spending was kept relatively contained in 2016, albeit to a lesser extent than in 2014 and 2015, and this moderation should continue in 2017 according to the initial Budget Law, helped principally by a decline in France’s debt service cost. Nonetheless, the primary structural balance (i.e. excluding the cost of debt), calculated using European Commission methodology, is projected to remain unchanged. The gap between the Banque de France’s 2017 deficit projection and the 2.8% figure in the Budget Law, as updated by the April Stability Programme, is attributable in more or less equal parts to the fact that our scenario factors in lower nominal GDP growth and stronger spending growth. On this basis, public debt should edge up again in 2017, reaching 96.8% of GDP (rise of 0.5 percentage point), and then continue to rise at a moderate pace over the remainder of the projection horizon. At this stage, the public deficit is expected to hover around 3% of GDP in 2018 and 2019, although with a slightly negative structural effort. These projections take into account the tax and social security measures already voted into law, but the impact of these measures is calculated on the basis of the Banque de France’s own growth projections. They also factor in a similar pace of growth in public spending as in previous years, but one that differs significantly from the forecasts in the Stability Programme as there is insufficient detail on many of the measures for them to be incorporated into our scenario. It should be noted that the savings measures announced during the presidential campaign, which are essential to bring the deficit down to below 3.0%, have not yet been taken into account.