Economic research – Product standards are a defining feature of industrial processes and citizens’ everyday lives: from A4 paper size to 5G mobile telecommunications, product standards are omnipresent. Though their prevalence is largely unnoticed by consumers, producers have to incorporate the specifications of these standards into their design and production processes. These standardisation efforts are not confined to national borders. Quantifying the effect of cross-country standard harmonisation, we find that it is on average equivalent to a tariff reduction of 2.1 percentage points. Given their large number, these standardisation efforts thus outnumber the effect of conventional trade policy tools. 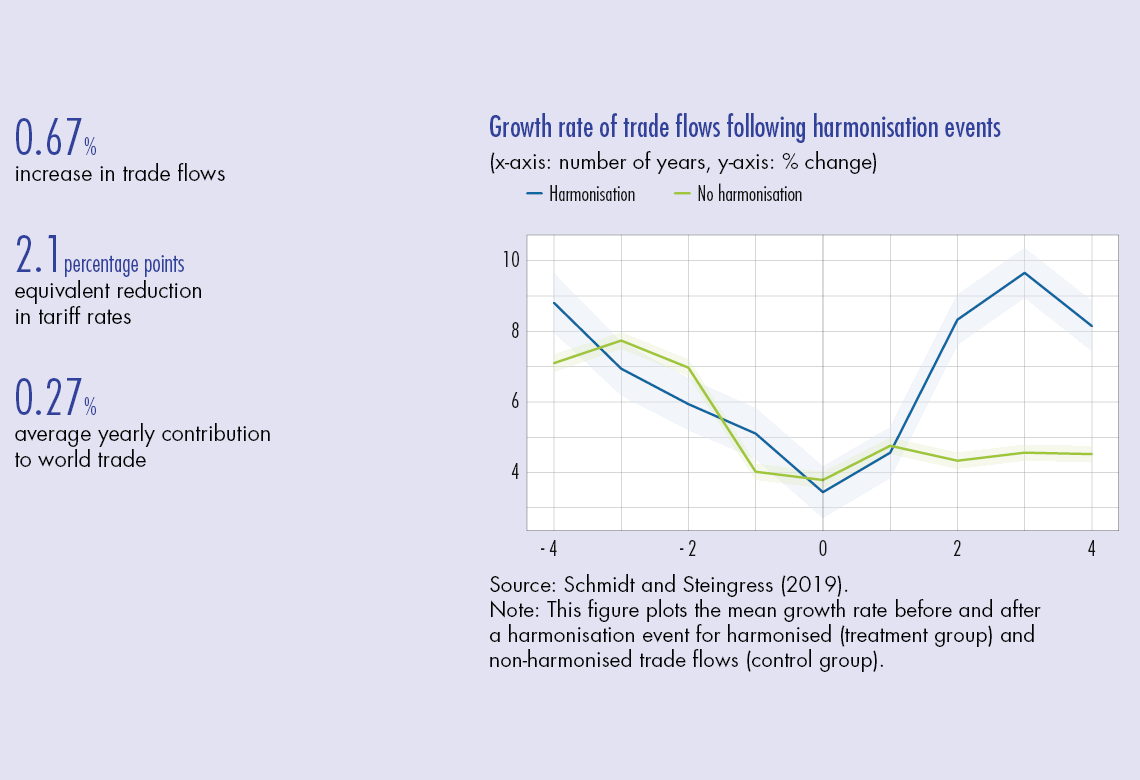 The concerns that were raised against trade‑promoting policies in the light of free trade negotiations such as TTIP and CETA, have given way to worries about looming trade wars in the wake of Donald Trump’s election.

However, a much more silent form of trade facilitation, which is not necessarily the direct result of government trade policy, is shaping the way firms produce and sell their output abroad: the elaboration of product standards and their cross‑country harmonisation by standard‑setting organisations, be they private or public. Take the example of general‑purpose shipping containers that can be stacked on top of each other and used for ship, rail and truck transport, thus facilitating the onward travel of shipped goods and reducing shipping costs to a fraction of what they were before containerisation. The standardisation of containers, i.e. the definition of dimensions, construction features or tracking codes, was promoted by the Bureau international des containers (BIC), a private‑sector organisation. Subsequently, standards disseminated by the International Organization for Standardization (ISO) in the 1960s led to the world‑wide expansion of the use of standardised shipping containers. Consequently, world trade expanded rapidly, with the contribution of containerisation estimated to be higher than that of free trade agreements (Bernhofen et al., 2016).

1 Beyond health, environmental or safety regulations: omnipresence of standards

Product standards have been categorised as a major obstacle to trade (WTO, 2012). The harmonisation of these so‑called non‑tariff barriers to trade has been identified as a major policy tool to promote the growth of trade flows. In this respect, policy makers mainly look at product standards through a regulatory lens by concentrating on those standards that are legally binding such as health, safety or environmental standards.

This notwithstanding, the universe of product standards is much larger, covering aspects of production processes and product attributes that are beyond regulatory concerns. The need for interoperability of complex technological systems (think about mobile phone technology or the internet) or compatibility of parts and components (think about screw threads or window frames) has led to the elaboration of standards that govern our everyday lives. Paper formats, electric plugs, railroad gauges and 5G mobile phone technology are prominent examples, but less obvious examples such as the composition of cement or fertilizer are abundant. Very often these serve the purpose of providing a production description to which producers can refer in order to categorise and advertise their products.