The international role of the euro

In a series of three articles in the Banque de France Bulletin, the international role of the euro is examined in terms of its history, its costs and benefits and, in this introductory article, the current health crisis. The efforts carried out to deal with the pandemic are largely founded on a dollar based international financial system and test the economic stability and credibility of US financial leadership. Twenty years after the creation of the euro – a stateless currency in a world made up of states – the position of the single currency in the world, which was initially called into question, and now encouraged, is still undefined. 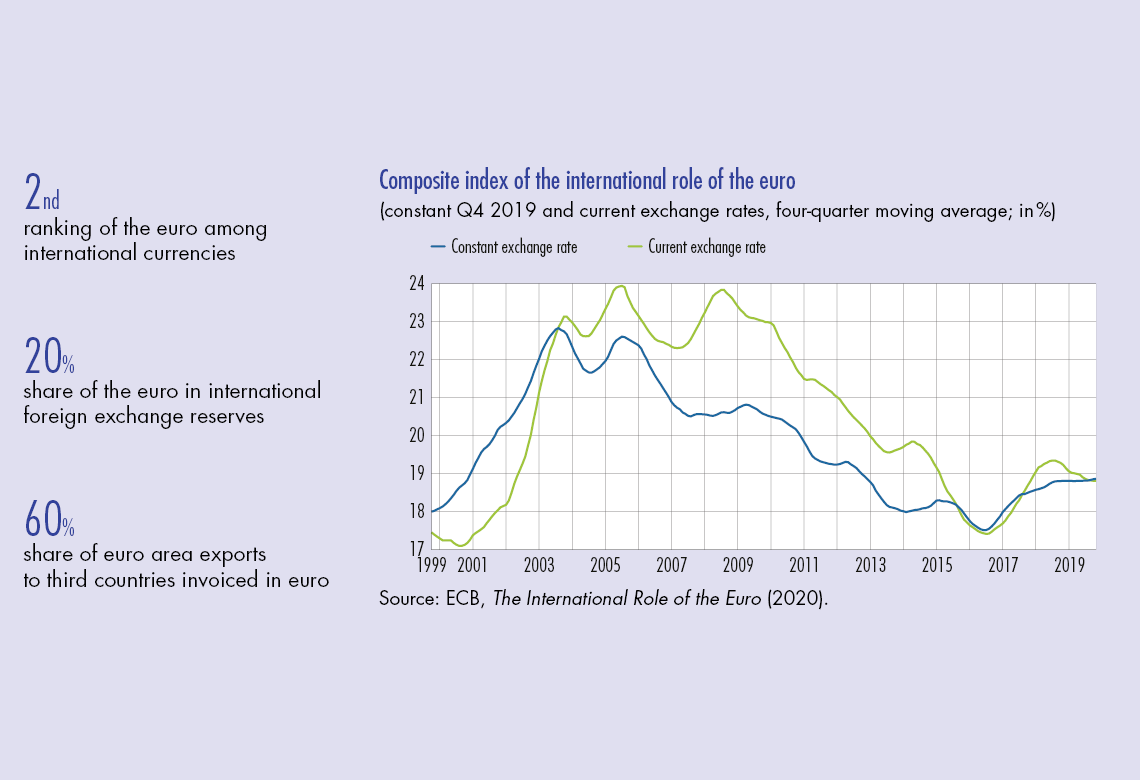 Since the start of the coronavirus epidemic, the European debate has focused on the question of the degree of solidarity that is desirable within the euro area. The series of articles looks instead at the external aspect of the single currency, i.e. the international role of the euro, its representation, and the way in which it is used outside the euro area as a means of payment, a savings instrument and a reserve currency.

Before going into detail, we would like to provide an overview and put into perspective some of the choices made when the euro was created. The current crisis is so violent that it would be premature to draw definitive conclusions, but it could well contribute to accentuating developments that were already perceptible.

1 Where do we stand?

The international weight of the euro

After twenty years, the euro is the world’s second most important currency, far behind the US dollar but ahead of all other world currencies. While the euro area accounts for around 11% of the world economy, the share of the euro amounts to around 20%, irrespective of the indicator chosen: 20% of global foreign exchange reserves, 22% of the international stock of debt securities, 15% of cross border loans and 18% of deposits (see Charts 1 and 2). In addition, half of imports into the euro area and 60% of exports outside the euro area are invoiced in euro (ECB, 2020).

The international role of the euro: a longstanding debate

The debate on the international role of the European currency is not new.

The “Werner Report”, which laid the foundations for the single currency in 1970, explicitly referred to it even as it defined its field of investigation not as the search “for an ideal system in the abstract” but as “the minimum that must be done”. It stressed that “in foreign relations, and more particularly in international monetary relations, the Community has not succeeded in making its personality felt by the adoption of common positions, by reason as the case may be of divergences of policy or of concept”. It is true that the report had adopted a proactive and broad approach, stressing, for example, the need to set up a democratically legitimised “centre of decision for economic policy” and to consult with trade unions.

The “Delors Report”, which paved the way for the effective launch of the single currency in 1989,…

publication
The international role of the euro
Télécharger (EN)