The euro in the history of the international monetary system

The international monetary system has alternated between periods with several cohabiting currencies, such as the dollar and pound sterling in the 1920s, and periods with one dominant currency, such as the dollar since 1945. Despite the political decision not to push for the euro’s internationalisation, and the decline in its role after the 2008 crisis, the single currency ranks second in the international monetary system, well ahead of those currencies behind it in the rankings, but still far behind the US dollar. The internationalisation of the renminbi remains limited at present due to the controls on China’s capital account. While the crises have confirmed the pre-eminence of the dollar, the policies currently being pursued by the United States, as well as recent technological developments, could provide an opportunity to promote the euro’s role, provided appropriate policies are put in place to safeguard the euro area’s resilience. 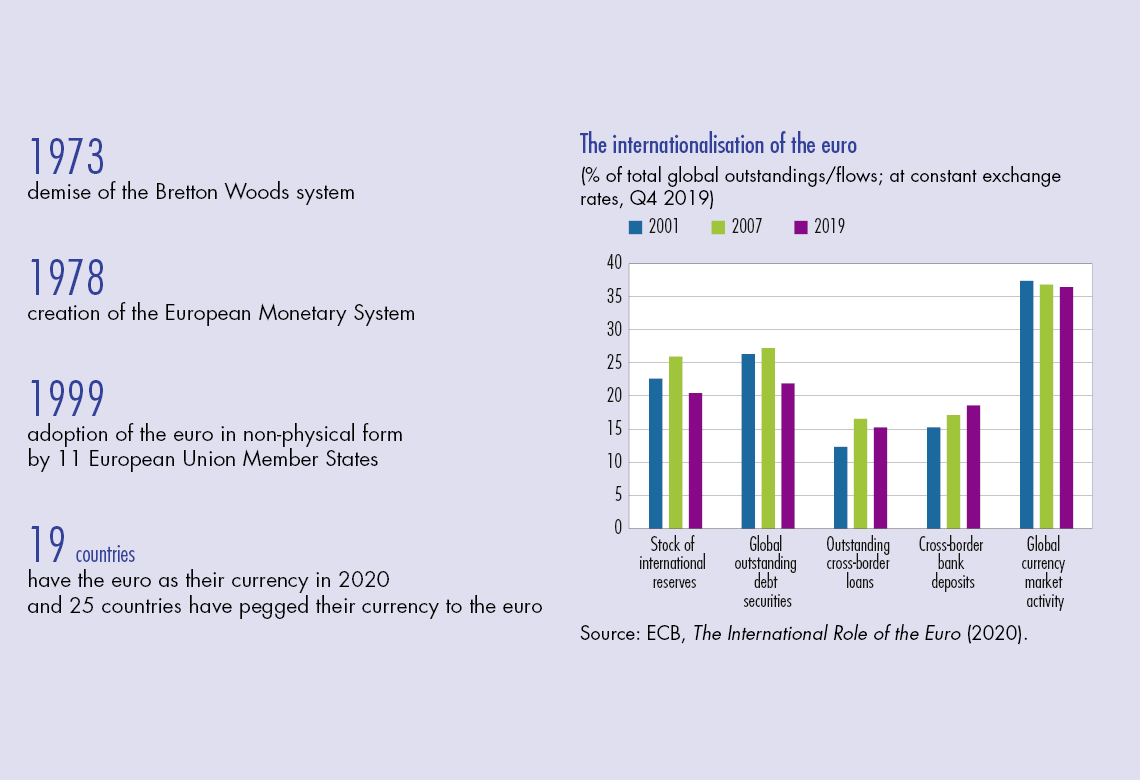 The euro is a young currency in the international monetary system (IMS). It has numerous advantages that make it well-suited to being an international currency: the euro area is a leading economic area; its economy, at least until the Covid-19 crisis, was committed to being financially and commercially open; its macroeconomic and financial stability are guaranteed
by the Eurosystem.

Nonetheless, network and inertia effects are often highlighted as the main explanatory factors behind international currency dynamics. As in the case of IT standards, network effects refer to the use of a currency by a large enough number of individuals to facilitate its circulation and reduce transaction costs. These network effects in turn create inertia, whereby a
dominant currency tends to retain its status.

The history of the IMS can also provide some insights into the prospects of the euro as an international currency, and the importance of network and inertia effects. There have been numerous periods where several currencies have shared international status, indicating that network effects do not necessarily lead to total dominance by a single currency. Moreover, once appropriate policies had been put in place, the rise of the dollar proved rapid, demonstrating that there are limits to inertia effects. Modern e-payment technology can reduce these effects even further, as it allows individuals to switch easily from one currency to another.

Despite a policy of neutrality on its international role, the euro has risen to become a major international currency, ranking second in importance in the IMS. However, it still lags far behind the dollar.

Today, the future of the euro as an international currency needs to be assessed in light of the policy of internationalisation of the renminbi, the decline in the relative size of the euro area economy, and the two recent crises – the 2008 crisis and Covid-19.

Prior to the Second World War, there were two periods when several currencies shared international status within the IMS – one before the First World War, which was particularly stable, and the other in the interwar period, which was much more unstable.

After the pound sterling dominated the 19th century as part of a gold standard system, the French franc and the Deutsche Mark both rose to take on international status, alongside sterling. At the time, given the high costs…