The impact of climate change in Sub Saharan Africa: vulnerabilities, resilience and finance

Climate change is both an immediate challenge and a long term constraint for Sub Saharan African (SSA) countries, particularly for the island nations and the states in the Sahel. The resilience of SSA countries is also greatly undermined by the critical importance of agriculture, demographic pressures and low levels of development (minimal rollout of green technologies, for example). National climate strategies and eco friendly investments must be reinforced, as policies to mitigate and adapt to climate change are a common goal for both national governments and their international partners. Combating climate change represents a mounting challenge for both fiscal and monetary policy but also for the financing of the economy. At the same time, international climate finance is still insufficient with respect to the commitments made by developed countries. This is particularly true for the least developed countries, which struggle to gain access to funds. 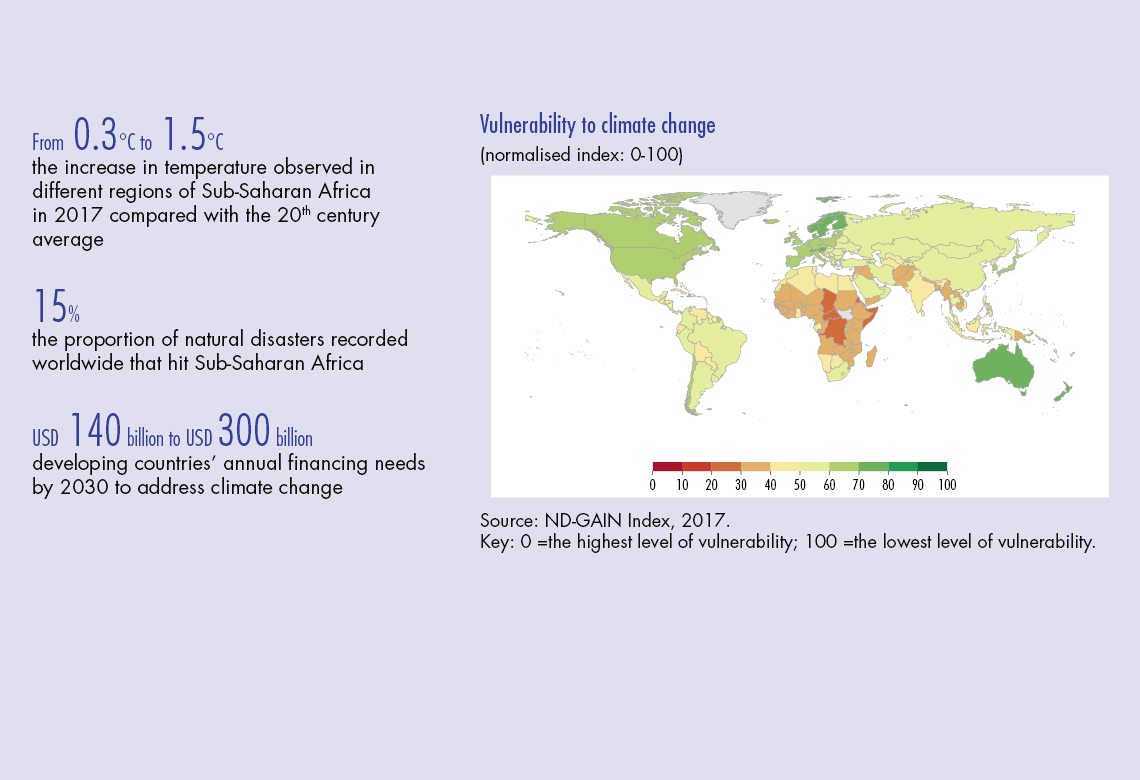 Climate change is both an immediate challenge and a rising long term constraint for Sub Saharan African (SSA) countries. Gradual changes in temperature and precipitation affect the aridity of soils and, with rising sea levels, contribute
to coastline retreat. Moreover, the proliferation and intensification of natural disasters can often accelerate these long term phenomena. The impact of these different climate phenomena varies depending on each SSA country’s intrinsic vulnerability to climate change, which in turn depends on the country’s physical geography, while the resilience of each country is a reflection of its economic, sociological and political characteristics.

The combat against climate change is also an opportunity to capitalise on the continent’s strengths. SSA has countless natural resources, such as its equatorial forests – one of the world’s most important carbon sinks and, with their geothermal capacity, river basins and solar exposure, a potential source of affordable, renewable energy. Lastly, increasing access to digital technologies may help reduce the technology gap to advanced countries.

SSA countries appear to be particularly affected by rising temperatures and steadily decreasing precipitation (see Charts 1 and 2). Africa – and SSA in particular – is one of the most vulnerable regions to climate change, and there is a high probability that the COP21 objective of limiting the global average temperature increase to below 2°C by the end of the century (IPCC, 2014) will not be met. Compared with the 20th century average, temperatures in SSA in 2017 had increased by 0.3°C to 1.5°C depending on the region (against an average of 1°C globally). A comparison of the average figures for the 20th century and for the 2001 17 period also shows that annual precipitation declined by 8.5 cm in the Economic Community of Central African States (CEMAC), by 4.0 cm in the West African Economic…