“Green Swans”: central banks in the age of climate-related risks

Risks associated with climate change are beginning to affect central banks’ financial stability mandate. Recognition of extreme physical and transition risks, known as “Green Swans”, is particularly difficult in the field of financial stability supervision due to the radical uncertainty, non-linearity and cascade effects associated with such risks. Central banks can help prevent these risks and mitigate their consequences, including by developing scenario analyses, but these initiatives will not be sufficient on their own. Climate change, like the current COVID-19 crisis, requires unprecedented collective action and coordination efforts among various actors. The article explores how central banks can promote such coordination, within their mandate, in order to reduce these new ecological and health risks. 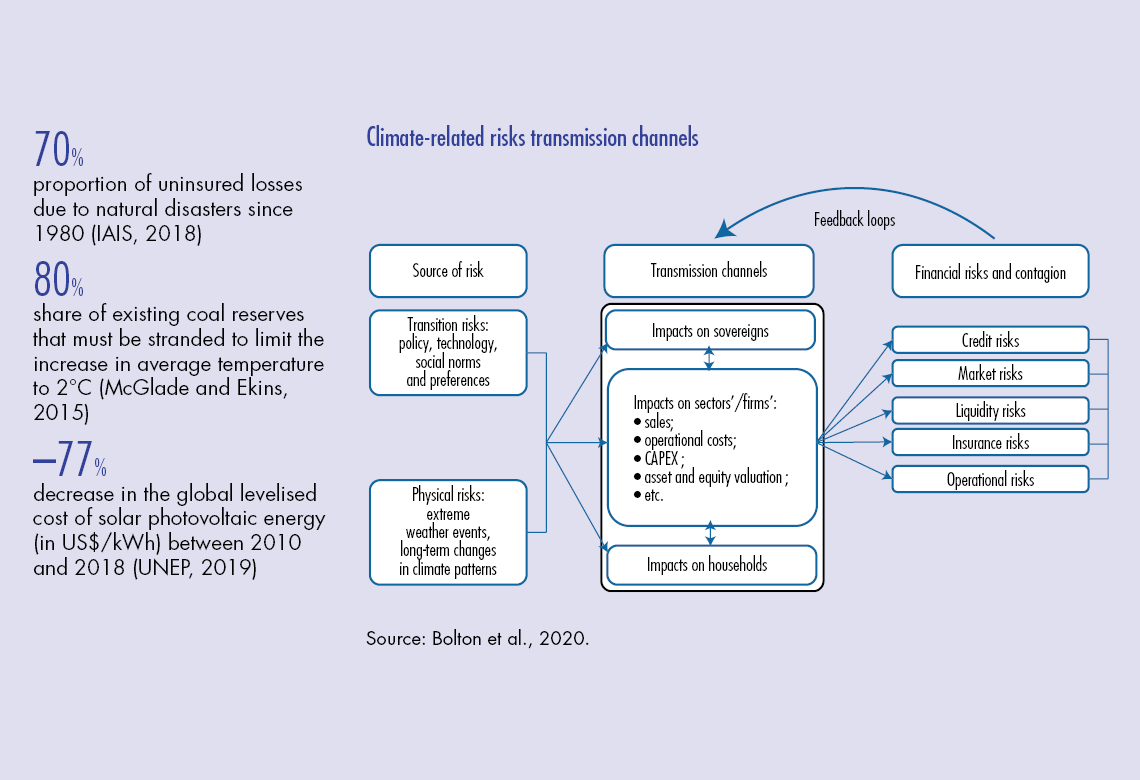 In recent years, the community of central banks, financial regulators and supervisors has recognised the need to address a new type of financial risk: climate-related risks (Carney, 2015; NGFS, 2018, 2019). While global warming is accelerating (IPCC, 2018) and its impacts on ecosystems and human societies are increasing (Masson Delmotte and Moufouma Okia, 2019), the scientific community warns that the worst is yet to come. For example, climate change could provoke conflicts, generate hundreds of millions of refugees (Abel et al., 2019), as well as pandemics (Legendre et al., 2015) potentially even more serious than COVID-19. Such events could cancel out progress made in poverty reduction (UN Human Rights Council, 2019) and cause “unprecedented suffering”, to quote the words of more than 11,000 scientists (Ripple et al., 2020).

Physical and transition risks can give rise to “Green Swans”.

These climate impacts threaten the stability of our socioeconomic and financial systems, and may affect central banks’ financial stability mandate (NGFS 2018). Two main types of financial risks have been identified: physical risks and transition risks.

Physical risks include economic and financial losses related to the increased frequency and intensity of extreme weather events (such as hurricanes or floods) as well as to long-term changes in climate patterns (such as rising sea levels). For example, uninsured losses, which account for 70% of total losses due to natural disasters since 1980 (IAIS, 2018), could undermine the solvency of households, businesses and governments, and thus that of financial institutions exposed to them.
Physical risks could also give rise to extreme disasters (Weitzman, 2011), which would severely damage the balance sheets of economic and financial actors.

A rapid and ambitious transition to a low-carbon economy would avert the worst physical risks, but would introduce others: transition risks. These risks arise from the financial consequences of public policies, technological breakdowns or obstacles, as well as changes in social norms and individual preferences associated with carbon-intensive activities. Limiting the increase in the average temperature to 1.5°C or 2°C particularly entails refraining from extracting a considerable proportion of the existing reserves of fossil resources (e.g. up to 80% of existing coal reserves, according to McGlade and Ekins – 2015). Such resources would thus become “stranded assets”. As a result, these reserves could rapidly lose value, triggering massive fire sales with potentially systemic effects (Pereira da Silva, 2019).

Physical and transition risks may…