The decline in investment in the European Union (EU) since the 2008 crisis can be partly explained by a sharp drop in business investment in South and Eastern Europe, which could be further exacerbated by the Covid-19 pandemic. According to recent survey data, in these countries, firms, and particularly the smallest firms, still struggle to obtain financing. In addition, over the past several years, the net equity financing available to firms in the euro area has been insufficient. These problems worsened during the health crisis, which led to the implementation of credit support measures. The Capital Markets Union (CMU) project aims to respond to these financing constraints by better mobilising European savings, which have increased since 2007, and by encouraging cross-border investments. 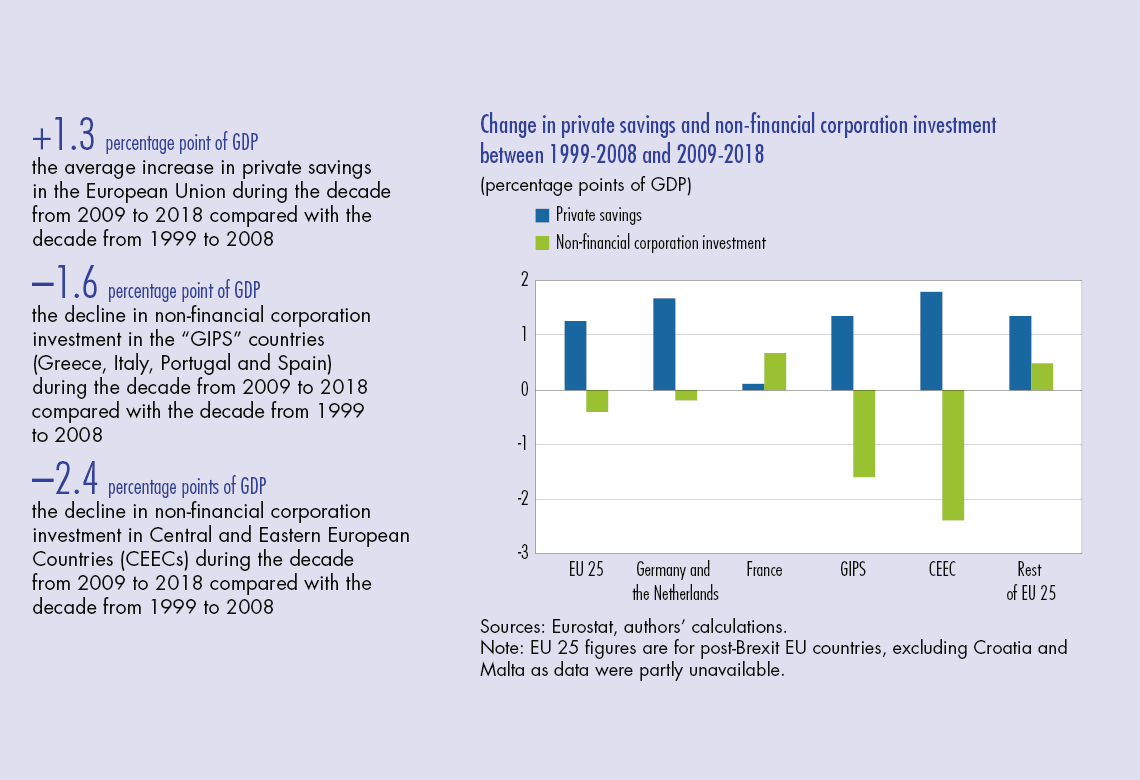 A sharp decline in investment since 2009

In the decade following the 2008 global financial crisis, average investment in the EU declined by 1.9 percentage point of GDP compared with the decade from 1999to 2008 (see Chart 1). This decline needs to be explained on two levels, as it is mainly the result of a decline in household investment and extremely contrasting situations within the EU. For example, levels of investment varied little in France, Germany and the Netherlands but declined sharply in the so-called GIPS South European countries (Greece, Italy, Portugal and Spain) and in Central and Eastern European Countries (CEECs). This can be largely explained by the decline in non-financial corporation (NFC) investment, which dropped by 1.6 and 2.4 percentage points of GDP, respectively, in the GIPS and CEECs during 2009-2018 compared with the average level observed during 1999-2008.

The observation that there is an investment deficit in Europe is nothing new: appeals have often been made for increased investment over the past decade (Enderlein and Pisani-Ferry, 2014). The Juncker Plan, which was implemented by the European Commission in 2015 and extended with the InvestEU programme until 2020, was one of the first initiatives to boost private investment in Europe.

A significant increase in private savings

Over the same period, savings in the EU have trended inversely to investment as the sharp decline in private investment in the CEECs and South European countries has coincided with a drop in public investment since 2008 and a rise in private savings (see Chart 2 below). At the same time, private savings in Germany and the Netherlands settled at a rate of around 25% of GDP and public savings grew in all the countries considered.

Growth in the EU’s current account surplus (see Chart 3 below) is a reflection of these increased savings coupled with declining investment in the GIPS and CEECs since the 2008 crisis. In fact, the financing needs of these countries is far lower than the savings surplus of Germany and the Netherlands, mainly due to the slump in their investments. Ultimately, the CEECs and the GIPS have now even come to be in surplus overall.

The EU is an economically developed area with an ageing population and as such, presents several structural characteristics that could explain a sustainable current…