Global financial interconnectedness: A Non-Linear Assessment of the Uncertainty Channel

The role of uncertainty in the global economy is now widely recognized by policy-makers but its effects on the international financial system are less understood. In this paper we assess the impact of uncertainty fluctuations on the interconnectedness within the international system of equity prices. In this respect, we extend the measure of connectedness put forward by Diebold and Yilmaz (2009) by allowing for non-linear effects through the estimation of a non-linear Threshold VAR model whose regimes depend on the level on uncertainty. Results clearly show that high uncertainty tends to generate more connectedness among equity indexes of a set of advanced and emerging countries. From an economic policy point of view, this result suggests that in the presence of high uncertainty, an adverse financial shock in a specific country is likely to propagate more widely and more strongly to the whole financial system. This result advocates for a close real-time monitoring of uncertainty measures.
By Candelon Bertrand, Ferrara Laurent, Joëts Marc 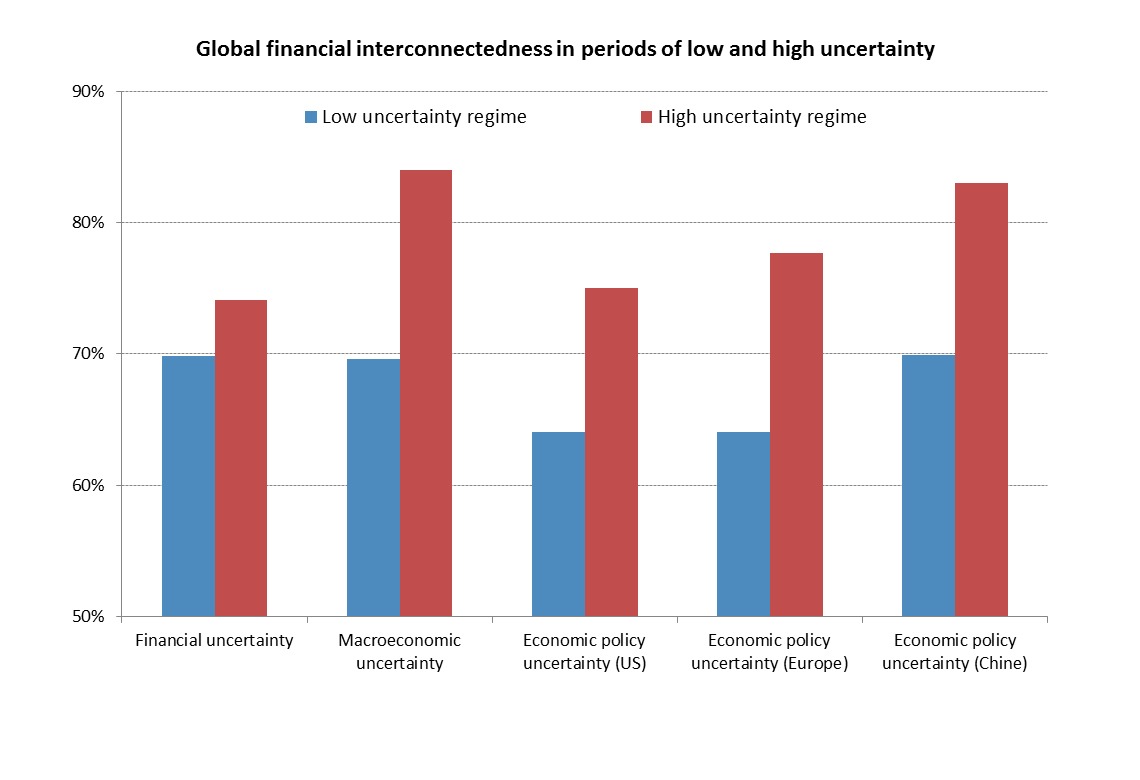 The diffusion of a financial crisis is one of the greatest fears among international financial authorities. The last Global Financial Crisis has made clear that looking at financial institutions in isolation gives an incomplete and misleading assessment of the impact of shocks to the financial system. Indeed, even a country with strong macroeconomic fundamentals can be hit by a negative financial shock stemming from other countries and experience severe financial turmoil. In this respect, a recent economic literature has investigated financial contagion in the form of networks by looking either at contractual agreements between banks or equity stock market comovements (see Braverman and Minca 2014, Acemoglu et al. 2015 among others). In this literature, financial networks are mainly established between banks or mutual funds and are often considered as self-organized without accounting for the influence of external forces. Another strand of the literature, without using any explicit network structure, tries to analyze the channels through which financial disruption is likely to spread across the world. For example, Glick and Rose (1999) and Weber and van Rijckenghem (2001) highlight the role of trade channel and financial flows. Other studies have also stressed that uncertainty also constitutes a channel for markets connectedness (see Kaminsky and Reinhart 2000, Rigobon and Wei 2003, Kannan and Köhler-Geib 2009). They show that financial contagion is quicker and stronger when it has not been anticipated by financial markets.

Our paper aims at bridging the gap between the literature on uncertainty and the one on connectedness. On the one hand, we evaluate connectedness among international financial markets using a network approach. On the other hand, we investigate uncertainty as a potential channel shaping interconnections between markets. Our empirical framework relies on the network approach developed by Diebold and Yilmaz (2014) to measure financial asset connectedness, based on the variance decomposition of the h-step-ahead forecasts in a VAR model. As an innovation, we propose a non-linear version of this approach by implementing a Threshold-VAR (TVAR) model that enables a different set of parameters to be considered depending on the values of an observed transition variable. We further assume that uncertainty is the transition variable that governs parameter switches within the VAR model. We apply this approach to a set of monthly stock markets indices for 13 major countries (the US, the UK, 7 European countries and 4 emerging markets) over the last 20 years.

Some salient facts emerge from our empirical results. First, the standard linear Diebold-Yilmaz analysis reveals that there is a fairly strong connectedness within global equity markets. This high degree of connectedness is mainly driven by financial spillovers among advanced economies, the US being the main driver, while emerging countries appear much less financially interconnected. In addition, although China is often considered as a regional leader, our results do not support the view that it is a global driver of financial interconnectedness, at least over the considered period of time. Then, by allowing for non-linearity, we get that the degree of connectedness within the global financial system is stronger when uncertainty is high, and conversely (see figure). This finding is supported regardless of the proxy for uncertainty used. Second, within the linear system of 13 countries, we identify the US and the UK as net givers to the system; China and Germany are rather neutral, while all other countries are net receivers. However, when allowing for regime-switching in uncertainty, only the roles of Germany and China become ambiguous, depending on the nature of uncertainty.

These results have potential practical implications. First, it may be useful for financial regulators to better evaluate the potentially contagious (and thus systemic) features of a particular crisis by integrating a monitoring of uncertainty measures. Moreover, the results represent a strong call for financial regulators and authorities to implement adequate policies to limit uncertainty. For example, financial regulations intended to guarantee the stability of the banking system reduce uncertainty and hence are likely to limit the transmission of a crisis. Reducing uncertainty can also be achieved by maintaining predetermined or pre-announced rules rather than applying discretionary policies. On the contrary, we can infer from our results that the high level of economic policy uncertainty inked to the Brexit negotiations is likely to constitute a favorable environment for a financial shock to spread more widely, especially because the UK has been characterized as a net giver to the global financial system..