A Kinked-Demand Theory of Price Rigidity

I provide a microfounded theory for one of the oldest, but so far informal, explanations of price rigidity: the kinked demand curve theory. Assuming that some customers observe at no cost only the price of the store they happen to be at gives rise to a kink in firms' demand curves: a price increase above the market price repels more customers than a price decrease attracts. The kink in turn makes a range of prices consistent with equilibrium, but a selection criterion that captures firms' reluctance to be the first to change prices---the adaptive rational-expectations criterion---selects a unique equilibrium where prices stay constant for a long time. The kinked-demand theory is consistent with price-setters' account of price rigidity as arising from the customer's---not the firm's---side, and their account of their reluctance to make the first step in changing prices. The kinked-demand theory can be tested against menu-cost models in micro data: it predicts that prices should be more likely to change if they have recently changed, and that prices should be more flexible in markets where customers can more easily compare prices. At the macro level, the kinked-demand theory induces a trade-off between output and inflation that substantially differs from prominent theories of sticky prices: the Phillips curve is strongly convex but does not contain any (present or past) expectations of inflation, and is non-vertical in the long-run. 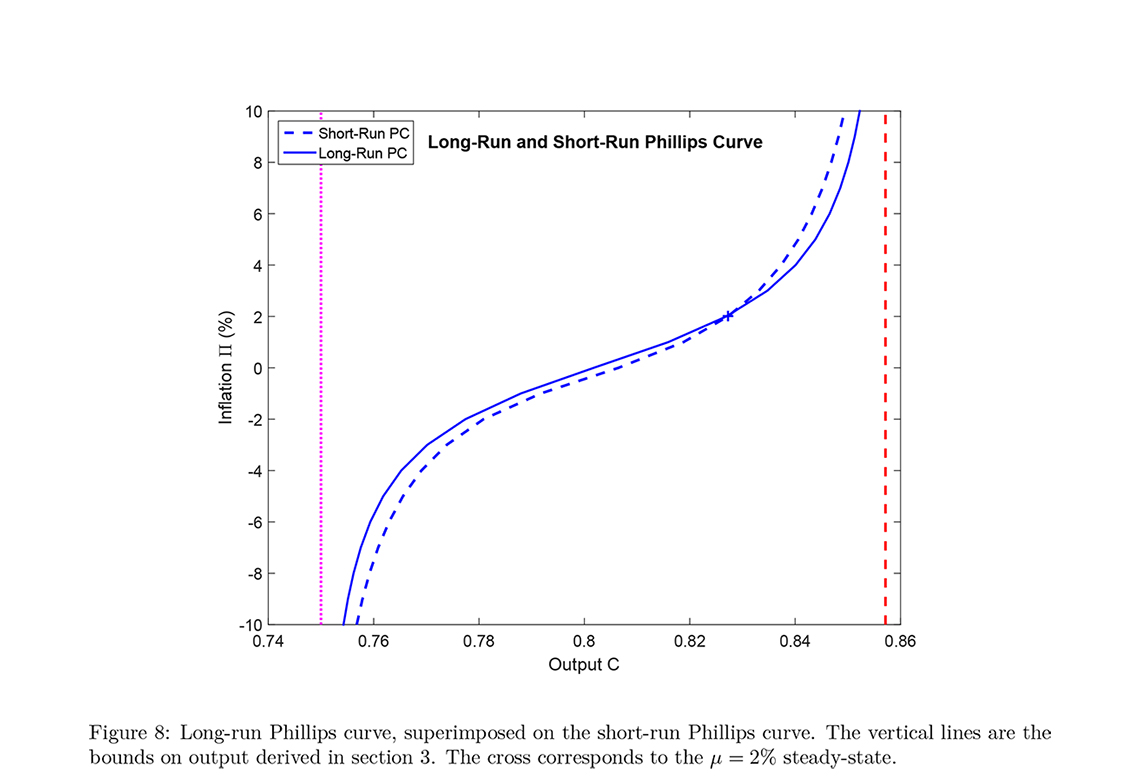 Why are prices sticky? Most monetary macro models, such as menu-cost models and models of producers’ inattention, have looked for a rationale for price rigidities on the firm's side. But firm-side models of price rigidity face an empirical challenge: surveys of price-setters repeatedly point instead at the customer's side as the source of price rigidity. When asked ‘‘why they don't change their prices more frequently than that’’, a majority of price-setters surveyed by Blinder et al. (1998) stress their fear of ‘‘antagonizing customers’’. The answer is vague. But price-setters seem to be telling us they charge a fixed price not because their desired price is too costly to implement or too difficult to learn about, but because their desired price itself is sticky. They point at customers' reaction to price changes: demand curves.

One of the oldest, and at a time leading, theories of price rigidity precisely locates the source of price rigidity on the customer’s side: the kinked demand curve theory, dating back to Hall and Hitch (1939) and Sweezy (1939). A likely reason for its lesser popularity today, the theory lacks the microfoundations of its firm-side counterparts. As a result, its internal consistency, and the key assumptions that distinguish it from the benchmark models of consumer demand, have remained open questions. I provide microfoundations—optimizing behaviors, standard equilibrium concepts and rational expectations—for the old informal argument for price rigidity of the kinked-demand curve.

The theory rests on two pillars. First, I show that relaxing a single assumption on customers in a model of imperfect competition gives rise to a kink in firms' demands: that all customers are equally informed on all prices charged by firms within a market. When instead some customers observe at no cost only the price at the firm they happen to be at, firms' demands become kinked: a firm loses more customers by increasing its price above the market price than it gains by decreasing it below. The kink in itself leads not to price rigidity but price multiplicity. Second, thus, is an equilibrium selection criterion. Surveys of price-setters are again informative on how an equilibrium is selected in practice: the argument for sticky prices that price-setters rank most positively is their reluctance to be the first to raise prices in the market. I introduce a new equilibrium selection criterion---adaptive rational expectations---that captures this idea. Adaptive rational expectations select an equilibrium where prices are sticky, turning the theory into a theory of price rigidity.

I show that the kinked-demand theory gives a substantially different account of the output/inflation trade-off. The Phillips curve of the kinked-demand theory is strongly convex but does not contain any inflation expectations shifters. The strong convexity limits the extent to which inflation can increase output despite the absence of expectation shifters. The absence of expectations shifters implies that disinflation remains costly even when the change in monetary policy is not only credible but also widely known, and has for corollary the absence of an inflation bias for monetary policy. The convexity also explains the flattening of the Phillips curve since the early 1980s, the missing disinflation in the US during the Great Recession, and the missing inflation in the Euro Area since 2013. Because it contains no expectation shifters, the kinked-demand theory predicts that the trade-off between output and inflation persists in the long-run: the long-run Phillips curve is non-vertical.